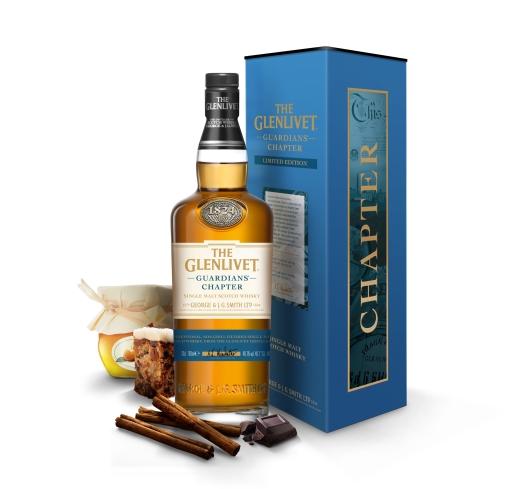 Thousands of votes across 37 countries have been cast by whisky lovers to select a new limited edition from The Glenlivet, with its Exotic expression revealed today as the winner, with 39% of the vote.

The announcement follows a global campaign by The Glenlivet, during which the brand reached out to whisky fans around the world giving them the chance to select the next The Glenlivet expression for the first time ever. The winning expression will be named “The Guardians’ Chapter” in recognition of the significant part the distillery’s fan club – The Guardians of The Glenlivet – has made to the voting. The new whisky – which is non-chill filtered, 48.7% proof and described as a rich, indulgent single malt – will be bottled in limited quantities and distributed around the world from March 2014, priced at $85 (or equivalent).

The winning ‘Exotic’ single malt was created using a subtle mixture of casks including Hogsheads and American oak barrels with the addition of a proportion of whisky from Spanish ex-sherry butts to provide a rich, exotic twist. The resulting whisky displays the signature fruitiness of The Glenlivet with the addition of rich, warm spicy notes. Rich and indulgent on the nose, it offers aromas of moist and sweet, candied apples balanced with a hint of orange marmalade. The taste combines juicy raisins with an undertone of dark chocolate orange zestiness, well balanced with a subtle warmth of spice, complementing a long and slightly dry finish.

The campaign began in September 2013, with Master Distiller Alan Winchester revealing the three expressions he had hand-picked for fans to choose from. The three expressions – which were selected to spark debate over single malt style preferences – were named according to their taste profile, with the options being Classic, Exotic and Revival. Fans of the brand were invited to tasting events held across the globe where they sampled and voted for their favourites.

In addition to the tasting events, a series of special evenings entitled the ‘Expression Sessions’ were held in London, New York and Mumbai. Designed to bring the styles of the three expressions to life through aligned cultural interests, the events included a range of speakers, including artists, academics, musicians and explorers. The London event saw design expert, Stephen Bayley, talking about ‘classic’ car design whilst explorer Benedict Allen described what encountering the ‘exotic’ meant to him. Videos and findings from the events, alongside the percentage breakdown of the final results, can be found on the brand’s website, http://www.theglenlivet.com.

Alan Winchester comments: “The story of The Guardians’ Chapter doesn’t end here. This is an opportunity to savour a unique, limited edition, single malt that’s already been admired and desired by thousands of whisky lovers. Our Guardians have written a new chapter in the distillery’s distinguished history; this will be their legacy and I’m really pleased with the enthusiastic response we received and the selection the Guardians have made.”

Nikki Burgess, Global Brand Director for The Glenlivet, adds: “Deciding on a new Scotch whisky expression is normally a privilege reserved for a very select handful of experts, revered for their knowledge and experience. With The Glenlivet Guardians’ Chapter, we wanted to recognise the passion and expertise of our Guardians in an original and inspiring way by inviting them to write the next chapter in The Glenlivet’s history. We’ve had an excellent response from fans across the world, particularly in the USA, the world’s no. 1 single malt market, and we are sure that our founder, George Smith, would be proud of the smooth and complex whisky that will bear his and The Glenlivet’s name when it goes on sale next year.”