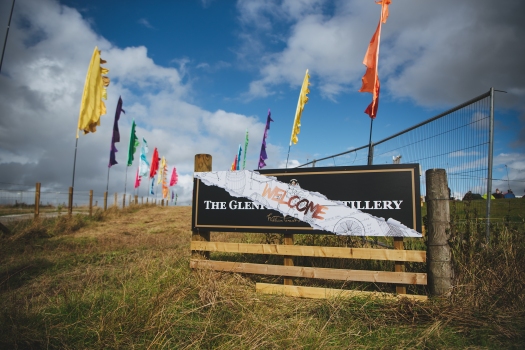 This weekend, The Glenfiddich Festival Experiment returned for round two, welcoming 700 bartenders to the brand’s spiritual home of Dufftown.

The private two-day festival launched in 2017 as a thank you to the Scottish hospitality industry for its continued support of Glenfiddich, and to celebrate the brand’s Experimental Series.

This year’s festival was bigger, better, and more experimental than ever – filled with non-stop entertainment, from music, to comedy, whisky tastings, and distillery tours. Music legends Razorlight and Scotland’s own Twin Atlantic stormed the main stage with their headline performances, supported by up and coming home grown talent Kashmir Crows, Chasing Abbey, The Rising Souls, Tom Hamilton, Atlas Run, Van Ives and many more. Glenfiddich’s own DJ Paradice flew in from the US especially for his late-night appearance on the Forest Stage.

The Whisky Lounge, a new addition to this year’s festival, boasted a breath-taking view over the Glenfiddich distillery. The lounge hosted live comedy from Gary Little and Leo Kearse and served up drams from across the Glenfiddich portfolio. This year’s lucky festival goers were treated to an exclusive tasting of Fire & Cane, the fourth concept in Glenfiddich’s Experimental Series – a smoky whisky finished in sweet rum casks.

Jody Buchan, owner of KIN in Edinburgh, commented: “It felt great to have a brand as historic and well-respected as Glenfiddich throw a party and to be given an invitation. To me it shows that the brand may be steeped in history but it can still be forward thinking and care about the people who help sell the product.”

Mark Thomson, Glenfiddich’s Ambassador to Scotland, commented: “Experimentation is at the heart of all we do, and bartenders play a key role in bringing that to life for customers. They show up to work every day and put their heart and soul into an often thankless job – with many pushing the boundaries and experimenting every day, just as we do. It’s brilliant to be able to say thank you to them with another year of festivities at our home in Dufftown.”