Today I attended the 3rd annual Altrincham Bottle & Cask Festival hosted by the Le Trappiste Belgian Bar in the historic Altrincham Market. After missing last years due to work commitments, I was looking forward to this years, and the promise of 30% more cask ales and cider than last year and with many new breweries making appearances, you’d be a fool to not go! 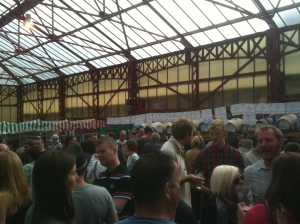 Only costing £5 to enter and £5 for a drink vouchers, me and my father made our way round the stalls of the local charity Stockdales, CAMRA as well as passing Dilli of Altrincham’s chicken and chorizo paella that they had produced. Le Trappiste had their own stall with a selection of lesser known Belgian, Czech, Dutch, German and American beers and there was a separate table of Ciders and Perrys. We made our way to the line of ales that awaited are taste buds. Local recognisable breweries include Dunham Massey Brewing Company, Bollington Brewery and Tatton Brewery entwined with lesser known Blueball Brewery of Runcorn, Wirksworth Brewery of Derbyshire and Red Willow Brewery of Macclesfied. Our first tipple of the day for myself was a recommended Porter ale from the Tap House Brewery of Derby named Dark & Dangerous (ABV 5%) while my father went for Derby based Dancing Duck Brewery and there 22 (Two Little Ducks) Copper ale (ABV 4.3%). For a starter drink, mine wasn’t too bad with a dark malt flavour with chocolate aromas, whilst my fathers was a balanced malt flavoured ale which set him up nicely for his next drink – Cheshire IPA from the Dunham Massey Brewery (ABV 4.7%)

I went for the bitter Little Bollington from the Dunham Massey Brewery (ABV 3.7%) which was a light ale with no distinct flavour reaching out at you. An easy drink that you can have a night of. The Cheshire IPA was a strong traditional IPA with a good mix of hops and malt. My father then went for one of Le Treppiste’s Belgian range –

Biolegere from the Belgian brewery of Dunpont (ABV 3.5%). It was a very light and blonde ale with again no distinct flavour reaching out to you. I went for the Oor Bonnie of Blueball Brewery in Runcorn (ABV 4.3%) which had a sweet nose of malt which gave off the aromas and flavours of caramel. A slight bitter taste rounded the drink off. I myself then went to Le Trappiste’s stand to try Callewaert Extra Stout (ABV 5%) which originated from the Struube brewery. This was a very nice dark, sweet beer that gave off a lovely brown head, perfect for my sweet tooth! My father opted for another local porter ale named Scoundrel (ABV 4.1%) from the Leatherbritches Brewery in Ashbourne. Another dark and smooth ale that gave off distinct chocolate and caramel malts.

To round off our visit we both went for the Le Trappiste Classic produced by the Bollington Brewery (ABV 7.4%). This was apparently made to celebrate the 1000th beer they sold! And to carry on the trend, it was a very dark and sweet Belgian ale to finish the day nicely.

The venue of Altrincham Market was perfect for the event, with me witnessing on several occasions people passing by and looking in, only to then be next to me in the que for a drink! The local band Bearfist were playing well-known rock songs from the 80’s to present day and the incredible smell of local award-winning restaurant Delli’s paella had me resisting splashing out! The crowd was a good mix of families, guys and girls, with soft drinks available for the designated drivers and wine for the ladies from Le Trappistes range (but to be fair, they weren’t afraid to have an ale in their hands!).

Overall, an enjoyable day out with some excellent beers from both the local breweries and Belgium itself. If you ever get the chance to go to these festivals, DO IT! There a great way of trying different drinks as well as supporting your local breweries. This is my 4th ale festival in 6 months, and my second hosted by Le Trappiste, and with 2 more coming up before the end of the year, there’s always plenty to go to and see!

For more information on Le Trappise, visit there website at http://www.letrappiste.com/

To join CAMRA and know when the next festival in your area is, see http://www.camra.org.uk/