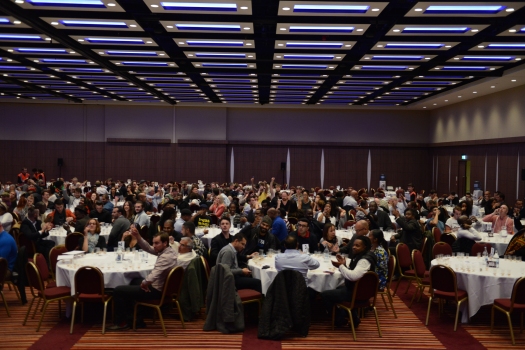 On Thursday 9th October rum fans joined Global Rum Ambassador Ian Burrell to take part in a very special tasting at London’s ILEC, ahead of the eighth annual The RumFest. 353 people smashed the record for the ‘World’s Largest Rum Tasting Event’, which was officially confirmed by an attending GUINNESS WORLD RECORDS™ adjudicator. Guided on a voyage of rum discovery, record breakers sampled some of the finest rums from around the world presented by esteemed figures from each distillery. Guests included Boardwalk Empire’s Michael Pitt and boxer David Haye.

At 8pm a GUINNESS WORLD RECORDS™ title was awarded to Ian Burrell for ‘The World’s Largest Rum Tasting Event’. A total of 353 attendees were given a comprehensive and unrivalled masterclass with six esteemed rums with leading rum names, followed by a Q&A.

Representing South America, Diplomatico was sipped and savoured with commentary from it’s International Marketing Manager, Xavier Herrera, whilst whilst Puerto Rico’s number one premium rum from the Serralles distillery, Don Q, was sampled with Chief Operations Officer, John Eason. The delights of Cuban’s classic Havana Club were highlighted by its Master Blender Asbel Morales Lorenzo and for a historical twist Pusser’s Rum, who’s recipe was drunk by the Royal Navy up until 1971, was presented by Head of Rum Procurement George Freegard. Angostura brought a taste of Trinidad to the evening hosted by Master Distiller John Georges and Appleton’s Rum provided the finale with a taste of Jamaica and its revered Master Blender, Joy Spence.

Speaking of the achievement, Global Rum Ambassador, The RumFest founder and host Ian Burrell said: “Rum is about history and that’s we all achieved today. It was a true honour to be joined by such esteemed representatives of the category and to enjoy such a special evening with so many rum lovers”
THE ESTEEMED PRESENTERS & RUMS