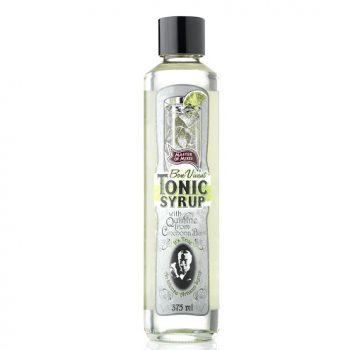 American Beverage Marketers, leading specialists in the cocktail ingredient category, have worked with drinks industry expert Giuseppe Gallo to create Bon Vivant Tonic Syrup. Launching to the on-trade from mid-April, and with listings in high profile accounts, the tonic syrup allows bartenders to experiment with the fundamental flavour profile of tonic water. Under development for almost two years, and inspired by the original formula of the Dutch West India Company, Bon Vivant Tonic Syrup can be used as a base for homemade tonic waters or added to cocktails to create an elegant bitterness.

Capitalising on the worldwide trend for the Gin & Tonic, Bon Vivant Tonic Syrup has been developed in response to demand from bartenders for a cocktail ingredient that allows them to consistently make their own tonic water. After researching original tonic recipes dating back to the 1600s, Bon Vivant is made using natural quinine from cinchona bark of the highest quality, sourced from the Congo, and lemons from California and Argentina. The citrus oils provide a refreshing, crisp flavour, whilst the quinine rounds off the syrup with a bitter finish at the end. Transparent in colour with a light golden hue, it is less sweet than pre-made tonic waters, and the natural flavourings allow the flavour profile of the gin or spirit it is paired with to shine through.

Giuseppe Gallo comments, “We are very excited to be launching Bon Vivant Tonic Syrup to the on-trade, especially at a time when we have seen a trend for lower-ABV cocktails gain traction, as well as a more considered approach to alcohol-free offerings. Customers’ palates are also becoming more sophisticated with a return to classic cocktails such as the negroni and bitter aperitivo style drinks, and the gin boom doesn’t show any signs of slowing. We have designed Bon Vivant Tonic Syrup in the hope that bartenders will be able to offer a more unique, authentic tonic water option, as well as opening up new flavour profile opportunities in mixed drinks.”

In a Gin & Tonic, Bon Vivant Tonic Syrup works particularly well with London Dry gins that have a strong juniper note, however the amount can be adjusted to accommodate different botanical profiles across the gin category. It also works well with different spirits and liqueurs, with recommended serves including Amaro & Tonic, Vermouth & Tonic and Italicus & Tonic. As a cocktail ingredient it can be used in sour classics such as an Aviation or White Lady instead of sugar, and there is the opportunity for bartenders to experiment with their own infusions and serves.

On the launch, leading bartender and UKBG president Luca Cordiglieri comments, “Bon Vivant Tonic Syrup is a great addition to the market with its floral and herbal flavour, and a sweetness that is not overpowering. I find it’s great for making your own Gin and Tonic, or as a cocktail ingredient.” Noting its usefulness as a cocktail ingredient, Simone Caporale also comments, “Whereas before you might have had to use lots of different elements to create a drink, the use of Bon Vivant Tonic Syrup creates an interesting complexity using just one ingredient, opening up avenues of creativity for bartenders to explore.”