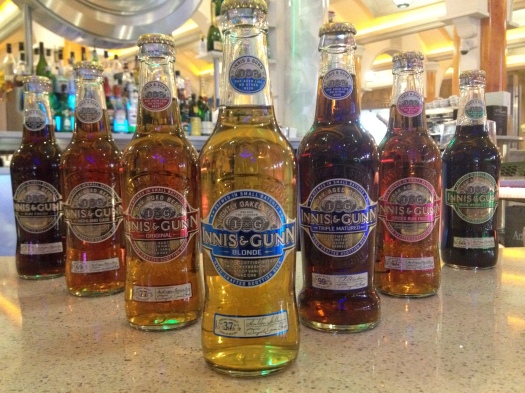 ‘Born by accident’ – a phrase with a rather distinct meaning behind it. But what if you could turn around that meaning and have it shone in a positive light, say, for example, the story of Innis & Gunn? I give this independent Edinburgh brewer as an example because it literally was ‘born by accident’. Back in 2002, an ale-finished whisky was sought by William Grant & Sons and they approached Master Brewer Dougal Sharp who proposed a special recipe and technique. He brewed an ale that was then stored in oak barrels for 30 days, which after being emptied, would flavour the maturing whisky of Grant’s Cask Editions.

After discarding the beer for many months, Dougal Sharp received a phone call letting him know that the distillery workers had been sampling the ale, and that it was absolutely fantastic! After receiving 9 out of 9 in their brewery tasting panel (a feat that even their beer brewed at the time hadn’t achieved) he decided to concentrate on bringing Innis & Gunn to the mass-market. In August 2003, Innis & Gunn Original was launched to an accolade of praise and awards, most recently a third consecutive Modern Monde Selection gold award. Six others have been added to the range since, all matured in a different way to give off their unique aromas and flavours. With this in mind, below I give to you my tasting notes –

Matured for a total of 77 days, notes of toffee and oak combine well on the nose, with vanilla making its presence felt on the palate that slowly mellows away into a creamy finish.

Matured for 37 days, a hit of oak and fruit on the nose to begin with, with a hint of vanilla following. A light offering of ripe fruits with malt flavours coming through near the end.

Matured for 57 days in rum-infused American Oak barrels, a light nose of spice and oak with dried fruits, with short flavours of vanilla and caramel on the palate that leads into a slightly dry finish.

Matured for 47 days in oak from Caribbean spiced rum casks. Lots of white fruits on the nose with fresh spice entwined that blends well with the lively start of caramel on the palate. A lingering malt sweetness mixed with oak to finish.

Matured for 60 days in barrels from a famous Irish whiskey distillery, a huge bold blend of chocolate and vanilla on the nose with sweet aromas dancing around. Very smooth on the palate, with chocolate dominating with a long-lasting finish. Slightly dry at the end.

Matured for 69 days in oak barrels which had previously been used to mature 18-year-old single malt Scotch Whisky from the Highland region. Light mix of toffee and malt with hints of orange on the nose, with a very smooth beginning on the palate with a mouth-watering fresh oak flavour. A long, sweet finish with a kick of malt.

Matured in 150 selected oak barrels and aged the longest for a total of 99 days, it produces a bold hit of chocolate and oak with ripe malt pushing through near the end. A slight tang on the palate as the three flavours mix with sour fruit. Honey and spice appear on the long finish.

Matured for 49 days, there’s lots of malt on the nose with a soft aroma of toffee. A huge burst of soft malt hits the palate, with a long tingling sensation that lasts a long time. Slight toffee and vanilla flavours creep in near the end.

Using American hops, it gives a soft aroma of vanilla on the nose with apple slowly becoming more apparent. A rather sharp start on the palate but soon mellows into a blend of citrus and malt. Rather long with a slight bitter finish with treacle.

Matured for 39 days with added molasses, roasted wheat and crystal malt. Soft sweet treacle on the nose with hints of chocolate coming through. Plenty of toffee and brown sugar flavours blending well, with a refreshing finish of hops that linger.

Limited edition and matured in specially selected 18 year old highland whisky casks. Rich honey notes on the nose with scents of heather, fudge and sweet marzipan.Very rich treacle on the palate, mellowing into a vanilla and honey combination that leaves a long, lingering sweet finish.

Although an extensive range, its uniqueness shines through with each recipe giving that different edge from its respective maturation. With this, Innis & Gunn has been well received when it comes to pairing with food including the Original that goes well with grilled seafood, steaks and cheese as well as –

Give them a try one day, and hopefully you’ll be seeing the range not only chilling in the fridges at your favourite bar, but also on the menu of a restaurant. Be adventurous, it’s well worth the hype!

Leave a Reply to That guy is a bitch Cancel reply