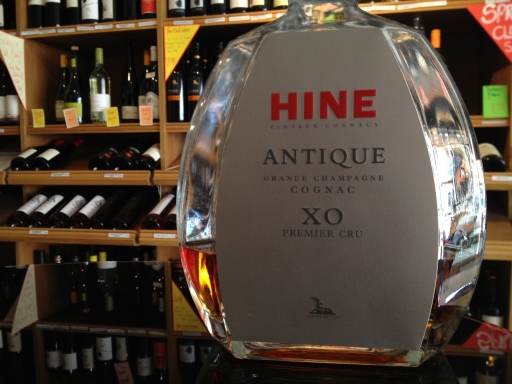 Continuing my theme of cognacs that seems to have taken shape lately, I’ve come across another rather well-known brand by the name of HINE. Dating back to 1550, the Hine family lived in Beaminster, Dorset, on the south coast of England, but it was the 18th century that the cognac link started when Thomas Hine decided to send his son Thomas to France to learn French and the art of making cognac.

Thomas, then aged sixteen, set foot in Nantes in 1791 and then travelled to Bordeaux and eventually Jarnac, a small town just east of Cognac. Since 1763, Jarnac had been the base for the négociant’s premises where Thomas was to create his father’s favourite cognac. In the early days, Thomas began his employment as a personal assistant, a respected and worthy position. Not long after his arrival, Thomas Hine made the acquaintance of Elisabeth, the daughter of a famous cognac négiociant and fell in love. In 1796, at the age of 21, Thomas married Elisabeth and they were to have four children.

Thomas Hine earned a reputation for being a serious, hard worker, but not lacking in a good sense of humour. His in-depth knowledge of finance and business, good commercial sense together with his French and English skills gave him special status. He expanded what was to become the traditional business of the HINE company; making bespoke cognacs for English wine merchants. When his father-in-law died, his mother-in-law chose Thomas, rather than one of her own sons, to take charge of the family cognac business. In 1817, Thomas gave his name to the company: Thomas Hine & Co. Just a few years later, in 1822, he died of pneumonia at the age of 47. His eldest son, Thomas Georges, just old enough to take over the reins of the company was to succeed him and carrying on the generations which today is into its sixth.

Each generation has had some kind of input into the HINE legacy. Isaac Georges Hine registered the HINE stag emblem as their trademark in 1867 and in 1920, Georges Thomas Hine created Antique, the most well-known of HINE’s cognacs. Robert Hine created the first advertising campaign for HINE in 1946 and current generation Bernard Thomas Hine added central Europe to the long, growing list of HINE markets in the 1960’s.

HINE is also rather unique in that its estate benefits from a south-facing aspect. This utilises the long hours of sunshine and heat an also contributes to the maturation.  The cognacs spend six to nine months in new barrels made from fine grain oak which will have given up their bitter tannins while being seasoned for three years in the open air.

So how does this process fair? Well below, I give to you my tasting notes on the range I have experienced so far – 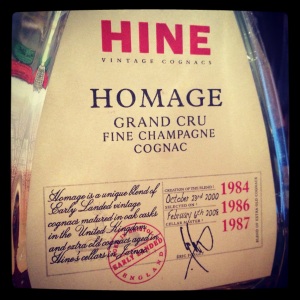 Light with dry fruit and sweet marzipan on the nose. Very light on the palate with an instant sweetness. Soft, with a mix of fruits and marzipan and a hint of spice.

A blend of Early Landed cognacs (a traditional method of maturing cognac – it is exported prior to maturation – thus the name – and is aged in cellars in the UK) as well as very old Cognacs matured in the Hine’s Jarnac cellars. The blend was created on the 23rd October 2000 and selected on the 6th February 2008 and contains cognacs from 1984, 1986 and 1987.
Fresh with ripe fruit on the nose and a slight marzipan aroma near the end. Lots of fruit and wood blends, with a sharp citrus flavour coming through as it develops. Rather short, but packs a punch of freshness that lingers very slightly.

A blend of cognacs from both the Grande and Petite Champagne regions. Light on the nose with sweet aromas of butterscotch and vanilla coming through. Very smooth and light on the palate with a powerful freshness with a dash of spice to create a long, lingering finish.

A great range so far, and with other expressions such as Rare VSOP and Homage, I can’t see them disappointing. A worthy addition to any night out if you see it in a bar, or indeed your friends drinks cabinet.

One Reply to “Hine Tasting Notes”