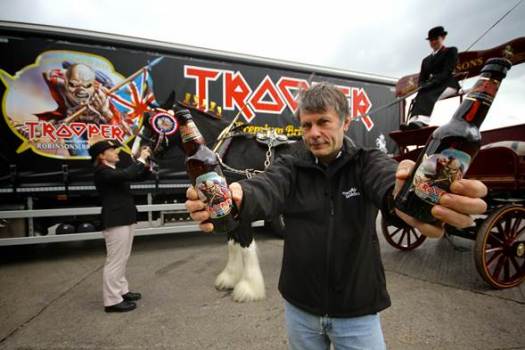 Rocker-cum-brewer, Bruce Dickinson,  has every music accolade under his belt worth having, but this is his first in the brewing industry and the fact that it was awarded in a blind tasting, which saw TROOPER unanimously voted best in class by the prestigious panel, makes this victory all the sweeter for Bruce.

This year the BBI competition, which first began back in 1953, attracted a record number of entries. Ed Binsted, BBI President, commented: “This year TROOPER was an outstanding entry. It was marked as the clear gold winner in that class by ALL the judges, I can’t remember this happening before. We set very high standards when conducting the blind tasting, none of the judges know the products they are tasting, as all labels, printed crowns and embossing on the bottles are removed, so the results reflect purely the quality of the products taste. Summing up I would say very well done to TROOPER.”

Commenting on his first beer award for TROOPER, Bruce Dickinson said: “As a dedicated ale drinker myself, I’m very aware of the many great beers available and the extremely high level of competition we face. For TROOPER to have grabbed people’s imagination and taste buds right from the very start has given us all a real sense of satisfaction. But winning our first award just months after TROOPER’s first birthday is the perfect icing on the cake and a great start to our second year in the beer game.”

John Robinson, Robinsons Brand Manager, is delighted with TROOPER’s first beer win: “It really has been an incredible journey and one which we are very proud of – from the initial beer tasting with Bruce, through the excitement of the launch, to now distributing TROOPER in just under 40 countries, quadrupling our export sales, brewing over 5 MILLION pints in its first year, and engaging a whole army of new beer fans – this award makes all the hard work worth it. And the fact that the accolade came on the back of a blind tasting just emphasis what we – and the fans – have been saying since TROOPER was first launched – the beer tastesgreat!”

The medals and certificates will be presented at the annual BBI dinner being held on Thursday 23rd October at The Vintners Hall, City of London.

As a result of TROOPER putting its beery head above the parapets and achieving huge global success over the last 12 months, Bruce Dickinson has been asked to announce the winner of the much-coveted ‘Champion Beer of Britain’ award at the Great British Beer Festival (GBBF) in London tomorrow (Tuesday 12th August) at 3pm; organised by the Campaign for Real Ale (CAMRA).

Colin Valentine, CAMRA Chairman, commented: “CAMRA are hugely proud to have Bruce Dickinson of Iron Maiden announcing the winner of the Champion Beer of Britain competition. He is a true real ale lover and has brewed his own beer with Robinsons Brewery called TROOPER which we are going to be selling at the festival.”

The unique flavour of TROOPER ale has proved hugely popular and will certainly be a must-try for many ale enthusiasts at this year’s festival.

The Great British Beer Festival will see over 55,000 thirsty beer lovers attend the week-long event, which will feature over 900 different real ales, ciders, perries and international beers across a total of 29 different bars. Robinsons’ TROOPER beer will be available while stocks last on the ‘Stilt Walker’ Bar (B10).