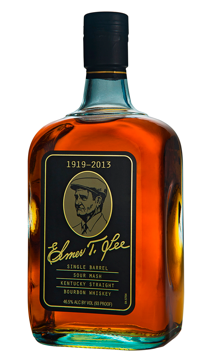 Celebrate the spirit of Elmer T. Lee with a new limited edition from Buffalo Trace. One year after the bastion of bourbon passed away at the age of 93, Buffalo Trace has created the Elmer T. Lee Commemorative Edition as a tribute to their iconic Master Distiller who devoted his life to
developing and safeguarding their unparalleled bourbon. With only 36 bottles available in the UK and featuring Elmer’s inimitable single barrel recipe, the Elmer T. Lee Commemorative Edition is set to become as legendary as it’s namesake.

After serving in the United States Air Force and graduating with a degree in engineering, Elmer joined Buffalo Trace’s Kentucky Distillery in 1949. It was his passion for engineering that enabled Elmer to develop the first ever single barrel bourbon in 1984, revitalising the industry and placing Buffalo Trace at the forefront of the bourbon trend. It was this revolutionary trait that was to stay with Elmer throughout his career, first as master distiller and then as Buffalo Trace’s global bourbon ambassador – travelling the world to impart his knowledge to bourbon fans and regale them with stories from his past.
It was only after almost 4 decades of service that he was honoured with his eponymous bourbon, visiting the distillery every week in his retirement to carefully select the barrels for his namesake spirit.

Sadly, Elmer died in 2013, just weeks before what would have been his 94th birthday and it is now, 1 year on, that Buffalo Trace honours Elmer again. Commemorating and honouring Elmer’s distinguished life, this velvet-smooth bourbon is the jewel in the crown for Buffalo Trace – a befitting celebration of Elmer’s many years of service. The release signifies Elmer’s boundless commitment to Buffalo Trace as well as his love of bourbon and it is for that reason that the Elmer T. Lee Commemorative Edition is bottled at 93 proof (46.5% ABV) – 3 proof
higher than the other editions (90 proof, 45% ABV), denoting Elmer’s age and quality as a Master Distiller.

Selected from the same warehouse floors, which Elmer liked to find his “honey” barrels for his
namesake bourbon, the Commemorative Edition features Elmer’s characteristic signature and wears the profile of the legendary Master Distiller, as well as details about his life, on the back label. Its smooth and balanced sweetness and classically spiced flavour, make this limited edition bourbon a must-have for enthusiasts and aficionados alike and features the classic Elmer T. Lee taste that bourbon fans have come to know and love.

In a final salute to Elmer, profits from the sale of this limited edition Elmer T. Lee Commemorative Edition bourbon will go to local Veterans of Foreign Wars charities.

Priced from £79.99 and available from 15 August 2014 from Gerry’s, Hedonism, Whiskey Shop and Amathus