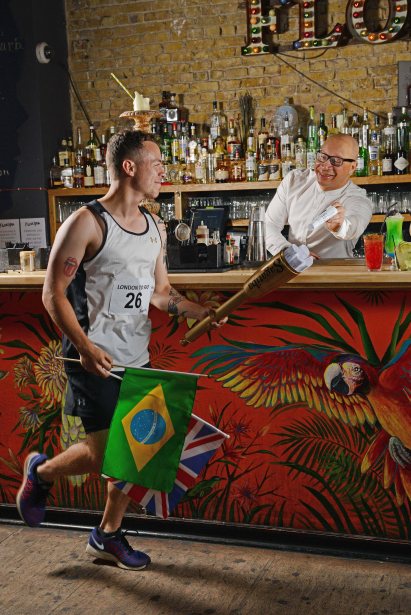 London bartender Fabiano Latham is on a marathon task to collect the finest cachaça recipes from the capital’s bars for sending to Rio in time for this summer’s ‘greatest show on earth’. The half Brazilian, half English bartender, sponsored by Sagatiba, hit the streets yesterday visiting 26 of London’s best cocktail bars today to gather the drink concoctions from top mixologists.

Collected in a specially designed torch fabricated from a cocktail shaker, the drinks recipes are being sent to Astor, on Leblon beach, Rio, for a special drinks menu on offer to fans throughout August.

Made from sugar cane juice, cachaça is the national drink of Brazil and is best known as the core base for the ciapirinha cocktail. Sagatiba is Brazil’s number one premium cachaça and has become a favourite of bartenders the world over looking to inject Brazilian spirit into their cocktails.

Commenting on the task, Fabiano Latham, Bar Manager of Chotto Matte, Soho, said: “Four years ago there was a great buzz around London’s bars when the games were here. While it is more of a marathon than a hop, skip and a jump, collecting these recipes in my Sagatiba torch is going to be a lot of fun, but no doubt exhausting. I hope to pass on some of the energy we all felt in 2012 to our friends in Rio through these fantastic cachaça recipes.”

The route being taken by Fabiano will see him run across London visiting top cocktail bars, including Trailer Happiness in the west, The Lounge in the south and Flight Club in the east. A wide variety of cachaça cocktails from the famed caipirinha to more elaborate creations is expected to fill the torch.