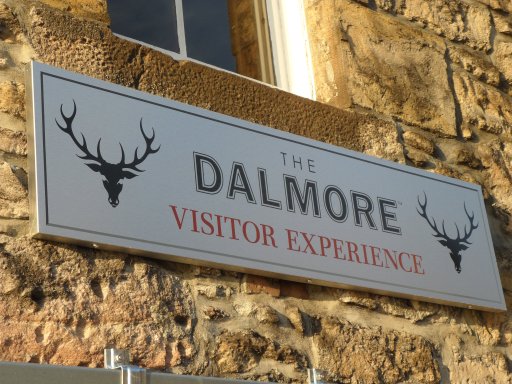 The second distillery of my Scotland tour was located in the North East Highland’s and a little town named Alness, home of The Dalmore.

After walking the short 20 minute walk from Alness town centre, we were greeted by a stunning location. The Dalmore distillery is situated on the banks of the Cromarty Firth, and with the morning sunrise filtering its way through the crisp January sky, it was the perfect setting as the light hit warehouses, pagodas and barrels.

Making our way to the visitors centre, we were greeted by our tour guide for the day, Morag, who whisked us off to the Dalmore Custodian Wall. The Dalmore Custodians is members only, where you can find exclusive rare bottlings, events and information, and if your were one of the lucky first 1263 Custodians (the year the Dalmore stag was founded), your name will be etched onto their Custodian wall. Next to the wall, was the story behind The Dalmore, ‘The Death of the Stag’. A replica of the canvas that is housed in the Scottish National Gallery hangs proud as Morag explained how in 1263, a predecessor of the Clan MacKenzie saved King Alexander III from a rampaging stag. The King rewarded him with the Royal emblem of a 12-pointed stag that he used in his coat of arms, and would go on to use on every bottle of The Dalmore since.

Morag then proceeded to explain the history of The Dalmore itself, which turns out to be a rather simple affair. Established in 1839 by Sir Alexander Matheson, he built the distillery overlooking the Black Isle. 47 years later, the MacKenzie family purchased the distillery, and with their history dating back to 1263, the iconic 12 point stag came to life. Recently, the MacKenzie motto ‘Luceo non Uro’ or ‘I Shine, not burn’ has also been used by The Dalmore. The MacKenzie family owned The Dalmore for almost a century, until Whyte and Mackay took over.

Making our way to the ‘Lauter Tun’, The Dalmore use golden barley from the Black Isle, which is then ground into grist which maximizes the amount of starch that converts into sugars during the mashing process. After milling, it is then ready for combining with yeast and water from Loch Morie. The barley is fed into the lauter tun (a huge copper pot) and combined with the Lock Morie water. The resulting mixture is named the ‘wash’ where it is pumped through to one of the 6 metre deep washbacks made of Oregon Pine. After being steeped for several days, the wash is then pumped through to their unique flat top wash stills to start the distillation process. This huge room, sweltering from the heat of these giant structures, houses 4 of the flat top wash stills, where their being heated at 94°C. The vaporised alcohol slowly makes its way up the still and through the lyne arm that leads to one of the four ‘cold water jacket’ stills. Pipes in the still pump cold water around, condensing the alcohol vapour into liquid or ‘low wine’ and is then pumped through the ‘spirit safe’ where they get the chance to control the condensed spirit.

Once we explored the distillation process, Morag took us to one of The Dalmore’s warehouses where, in a rather bitterly cold environment, rows upon rows of casks were housed. She explained that The Dalmore use only two kind of barrels to mature – American white oak bourbon barrels from Jim Beam, and Matusalem sherry casks from Gonzalez Byass. The Dalmore is the only distillery permitted to source Matusalem sherry wood from Gonzalez Byass, giving it a unique blend of 30 years of oloroso sherry flavours. Morag also told us a fascinating story regarding The Dalmore’s New Years Eve celebrations back in 1999. The staff and their families were quite possibly making history as they gathered at the distillery and the chimes echoed, they produced what was very probably the first scotch whisky anywhere in the Third Millennium. 12 years later, the first casks are set to be bottled.

The final part of the tour was to enjoy the work that Master Blender Richard Patterson and The Dalmore create. We entered a small room with a round table laid out in the middle. Here, 12yr, 15yr, 18yr and King Alexander III waited for our approval. So below, I present to you my tasting notes on each:

Aged for 10 years in a Jim Beam cask and then 2 years in a Matusalem sherry cask. A nose of vanilla and honey with an orange citrus and a more subtle hint of vanilla, cocoa and marmalade on the palate.

12 years in a Jim Beam cask and then 2 years split into 3 thirds. One third in Apostoles cask, one-third in Amoroso and the last third in Oloroso. The final year is matured in a Matusalem sherry cask. On the nose it has an orange and marmalade blend, with hints of fruit cake. A well-balanced ginger and mandarin flavour on the palate, with chocolate hints coming through.

Aged for 15 years in a Jim Beam cask and then 3 years in a Matusalem sherry cask. On the nose, fruit and spice blend well, with subtle almond and cinnamon aromas near the end. Vanilla, rosemary and hints of coffee present itself on the palate, with slight flavours of citrus and cocoa near the end.

This is the only Single Malt with 6 different finishes – Matusalem, Sauvignon Blanc, Amoroso, Jim Beam, Oloroso and Apostoles. Fresh flowers and exotic fruits being released on the nose, with vanilla and zest of oranges coming through. Red berries and hazelnut, almond, rich citrus and vanilla produce a very smooth, sweet flavour on the palate.

I feel that I need to apologise for the briefness in my review of The Dalmore distillery. Compared to the in-depth writing of my visit to Auchentoshan, it may feel a little rushed. This was down to a rookie error on my part, my notebook was left back at the B&B. I have therefore lacked the specifics regarding the intricate workings of The Dalmore, however, I’m sure that if you have read this far, you will let me off this once! I do intend to return to The Dalmore in the near future, and my tasting notes cover the core range of what The Dalmore offer, where if you purchase any of the four available, you will not be disappointed.

For more information on The Dalmore, see my review of the brand here.

4 thoughts on “The Dalmore Distillery Tour”