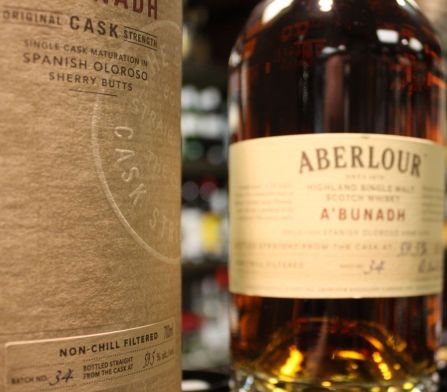 Aberlour is a Speyside whisky that I have had the pleasure of coming across several times. The nature of my job can sometimes bring together many a whisky note, but never a fully fledged piece on the brands in question. Well it’s about time I write a little bit on one of these names that you may see keep popping up.

As mentioned, Aberlour is situated in the Speyside region of Scotland, and is steeped in history. Aberlour is an ancient place, a fact that is celebrated via the picture of an oak tree on the Aberlour label. Why an oak tree? Well a long time ago, a druid community lived in the valley. Water and oak trees were important to the druids’ culture, resulting in the oak tree becoming the Aberlour symbol. Fast-forward a few years to around AD 580 where a missionary, St Drostan, established himself at the Aberlour site. He used the spring water to baptise local people and to this day, the spring water from the very same source is used to produce Aberlour.

Aberlour itself was founded by a gentleman named James Fleming. Born in 1830 and the son of a local farmer, he became a grain dealer and supplied many whisky distillers. This interaction encouraged him to establish his own distillery, and so acquired land at Aberlour, the same land that housed the spring water mentioned above. The year 1879 saw the beginning of the distillery taking shape, with Fleming designing most of the buildings and machinery himself, and within a year had its first flow of whisky.

1895 saw the death of James Fleming, and three years later a fire destroyed several of the distillery buildings and most of the whisky stocks. Under the supervision of Scotland’s foremost designer of whisky distilleries, Charles Doig of Elgin, the Aberlour Distillery was rebuilt.

With the spring water that flows from the slopes of Ben Rinnes and along the Lour Valley, to the double casking (whisky is matured separately in specially selected ex-bourbon casks and ex-sherry butts, then, when it has come to age, the whisky from the two sets of casks is brought together), a rather splendid range comes to fruition. With this, below, I give to you my tasting notes on the drams I have had the pleasure of coming across –

Rich raisin and fig aromas on the nose, dark chocolate a plenty, with soft caramel following. Very soft on the palate, with nuts, caramel, dark fruits and hints of cinnamon creating a well blended long finish.

Soft red apples on the nose that flows onto the palate and blends with ginger, cinnamon and rich chocolate. Creates a warm, sweet finish that lingers.

Aberlour 16yr  Double Cask Matured – 40%
Dry but rich on the nose with spice and raisins dominating. Quite sweet on the palate with a soft plum and long oak finish.

Subtle soft, dry fruits with vanilla and light honey on the nose. Plenty of oak, with hints of sherry that dries the palate. Orange and vanilla blend well to create a soft entry of flavour. Lingering finish.

Lots of sherry notes on the nose hitting the senses left, right and centre, with plenty of bursts on every breath. Spicy flavours coat the palate, but its enjoyed on a silky smooth texture caused by the sherry casks.

Very floral on the nose that develops into an instant spice flavour on the palate. A rather hot tang follows into a dry finish.

Lots of spice and rich orange combine well on the nose and continue on to the palate with ginger and chocolate flavours coming through. A bitter oak and sherry end.

Plenty of sherry aromas on the nose, with cocoa and hints of orange following. A developing warm spice on the palate, with ginger and raisins coming through. Delicate, long, and very warming on the finish.

Well balanced sherry and orange aromas on the nose. Light, with a developing warmth and spice on the palate. Plenty of sherry, with hints of ginger sliding in on the lingering finish.

Sultana, apple and chocolate notes on the nose, with lots of spice, treacle and dark chocolate blending well on the palate. Creates a very long finish.

Their core range also includes a 10yr, and plenty more Aberlour a’Bunadh Batches will be released in the coming years.

If you ever have the chance to try, or indeed purchase, it’s well worth a dram or two. One of the lesser known Speyside malts out in the market, but a good range nevertheless.