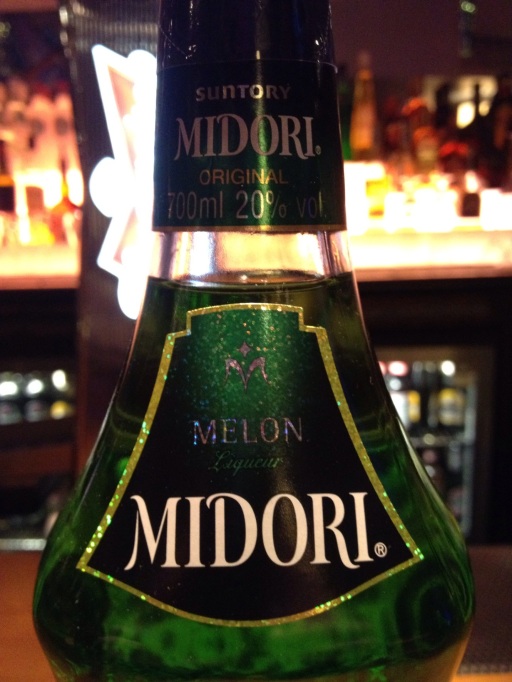 Midori is Japanese for “green”. Yes, that green bottle that adorns many a back-bar and turns a cocktail into a vibrant colour. But it is also one of those liqueurs that you will probably never had on its own. Any particular reason? Not really. Midori is a melon liqueur and many consumers have nothing against the fruit, but I suppose when was the last time you asked for something fruity, straight, over ice?

I think with this common theme, Midori has adapted itself to become rather versatile when it is introduced with other ingredients. But before we come onto some fantastic examples, lets see how this Japanese spirit first came about.

Midori, developed by Suntory, was launched in the United States in 1978 and with a party at the famous nightclub Studio 54, attended by the stars of Saturday Night Fever. Within the year of its release, Midori was named as the base to the cocktail ‘The Universe’, the winner of the US Bartender Guild Annual Competition. Following success in the USA, Midori launched in Australia and then Britain a year later, with international recognition in 1984 as the cocktail ‘Green Eyes’ became the official drink of the LA Olympics.

The reason for its success? Melons.

The use of premium melon mainly from Yubari, Japan. Yubari melons account for just one percent of melon production in Japan and can only be found in this region. But first created is the raw liqueur using the best method for this specific type of melon. They then combine the raw liqueur with other fragrant ingredients using Suntory’s exclusive blending techniques.

So with its international recognition, and exclusivity, how does it fare? Well below, I give to you my tasting notes –

Strong melon aroma on the nose with sweet notes coming through and lingering onto the palate. Fresh hit of melon on the tongue, although rather light. Sweet, lingering, and rather short.

Now as mentioned, its versatility seems to be the way bartenders have exposed this liqueur to the world, so try one of these –

Shake ingredients together and pour into a glass. Garnish with a red cherry.

Shake ingredients together, and pour into the Champagne flute.

There’s never anything wrong in ordering a liqueur on its own, especially to truly appreciate what you are drinking, and to realise how adaptable it is, but sometimes a cocktail can show its true colours, and that’s why Midori, and why bartenders choose to keep using it, has done so well in competitions these past 25 years.