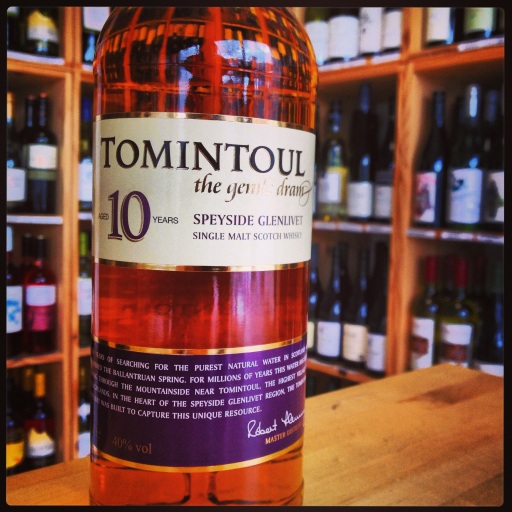 When you think of whisky you think of old. Distilleries built in the late 19th Century, generations of families and plenty of master distillers. But not all names can be called old, take for example Tomintoul.

Tomintoul Distillery was built in 1964 under the ownership of Hay & Macleod and W & S Strong in the village of the same name, which itself is one of the highest villages in Scotland at an altitude of 345m. The distillery is located in the Glenlivet Estate at Ballantruan on the east side of the River Avon. Located here after a quest to find the purest of water sources for use in the malt whisky making process. The search located the Ballantruan Spring and Tomintoul Distillery was built close to it.

Tomintoul is created by master distiller Robert Fleming, whose family has been making whisky in the Speyside Glenlivet region for four generations. Inspired by tradition, he has produced a single malt of unique quality, which is now available in six expressions. I picked up a bottle of the 16yr on my last trip to the ‘whisky capital of the world’ Dufftown, and recently tried their 10yr, so below, I give to you my tasting notes –

A light nose of vanilla, oak and malt lingers onto the palate. A warm flavour of sugar, honey and toffee blend well on, with a touch of spice on the short finish.

Aromas of light hazelnut on the nose with a whisp of dried grass. Incredibly smooth on the palate with a developing spice after a dose of light nut. Lingers into a warming finish.

Quite an impressive feat for a whisky that’s say not as well-known as others in the Highland range.