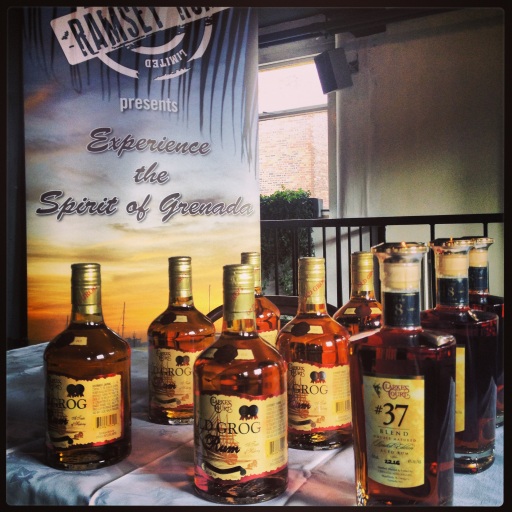 Ramsey Rum are innovators in the field of Grenadian rums. Not possibly your first port-of-call when it comes to your origins of rum, but if your adventurous like myself, you’ll be intrigued as to what they can offer. What I’m going to do with this piece is showcase to you two very different expressions that they have been delivering to some of the best rum shacks here in the UK.

We’re going to start off with River Antoine Royal Grenadian.

It’s hard to believe that the River Antoine Royal Grenadian rum has been produced since 1785, only nine years after the US Declaration of Independence. The River Antoine Estate stills holds its history and character that it had over 200 years ago, and its production methods haven’t changed much either.

To create the on average 35 gallons per day, the sugar cane they use is grown on the estate and crushed using the water powered cane mill. The now freshly squeezed juice then flows into the boiling house where it is cooked in iron pots over an open fire. The liquid thickens, and with added lime that aids the fermentation over eight days, the resulting wash is drained into a pot still. Here, some of the products of a previous distillation are added to the fermented wash, and then heated up by a fire located directly underneath the copper pot. Once distilled, and depending on the cut (usually the heads and tails will form a basis for the next batch), it is directed straight towards the bottling plant.

The demand for this overproof rum has grown, to the point of in the late 90’s, it required the purchase of an additional still by the same company who created the original – John Dore and Co. They also now house a visitors centre, but still keep the 1785 character.

The River Antoine Estate prides itself in being one of the few distilleries where you can see all of the stages of rum making as well as being one of the strongest unblended pot still rums bottles in the East Caribbean. It’s also said that the locals say “Don’t say rum, say Rivers.”

Well, lets see how it fares –

A developing sweetness on the nose with tropical fruit notes. Plenty of the tropical fruits linger, with short bursts of fresh citrus flesh and molasses. Creates a fresh finish.

A cracking rum on its own, and a rather enjoyable sipping one at that. Grab yourself a bottle for a pleasant surprise.

How about a rum from the same country, but possibly to a wider consumer base?

Clarkes Court Old Grog rum comes from the Grenada Distillers. Operational since 1937, they are the largest and probably the most well-known distillery in Grenada, situated on the southern part of the island within Woodlands Valley. The name Clarke’s Court rum derived from the bay of the same name, but before it took this up, it was formerly known as Tradewinds and Red Neck. There’s two different stories to how the name Clarke’s Court comes about –

‘It is believed that the name “Court” came from Dutch Colonists who came to Grenada in 1670’s and attacked the town, seizing some lands and the Bay in Woodlands, naming it “Court Bay”. The French later recaptured these lands. From 1763 to around 1801, Gedney Clarke Esq. bought parcels of land from the French, totaling 780 acres, known to us now as Woodlands Estate. The land bought included Court Bay; hence from these sources today we have the name Clarke’s Court.’

Grenada Distillers produce fourteen different varieties of rum under the Clarke’s Court banner, with two that Ramsey Rum look after here in the UK. One of them is the Old Grog (the other being #37), which pays homage to the early days of Grenadian rum when it use to be shipped to his Majesty George III of England. In order to identify the King’s rum, the barrels were initialed G.R.O.G. which is the abbreviation to Georgius Rex Old Grenada. Old Grog is a blend of molasses rums ranging in age from 4 to 10yrs, although no age statement is claimed on the bottle. Both whisky and bourbon barrels are used in the ageing of the rums.

Lots of banana and cinnamon evident on the nose, with a smooth offering of both on the palate. Vanilla and fudge are also present, with flavours of fresh pineapple also coming through to develop a long finish.

A cracking rum, and very different to what you would expect it to be, especially with rums in there aged 4-10 years. This one is also an award-winner, taking gold in the World Spirit Awards in 2010, the same in the 2008 Beverage Tasting Institute and Bronze in the International and San Francisco World Spirits Competitions.

Pick a bottle up for your collection if you can, and show your support if you see this in your local bar. Grenada is becoming a force in the rum world again.

One Reply to “Ramsey Rum Review”