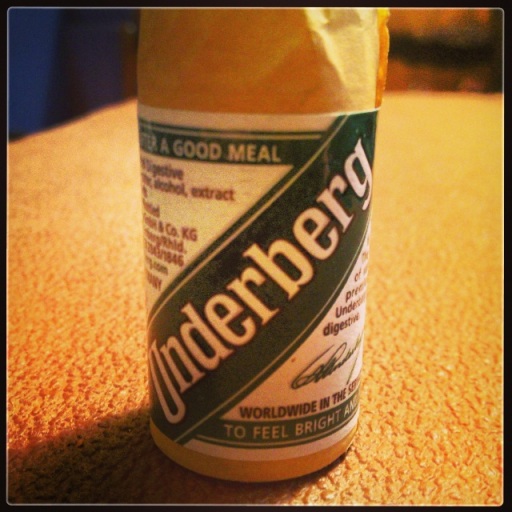 Have you ever had a really good meal? So good in fact, that as soon as you are asked by your waiter if you would like to see the dessert menu, you contemplate without a moment’s pause and ask for your favourite as you know it will go down a treat? But the horrors of that last bite soon after can lead to unwanted feelings – stomach churning, the inability to stand, the loss of feeling as your head seems to become heavier and heavier. The thing is though, you’re doing all of the above with a smile on your face. And why? Well you know you’ve got a cheeky drink of Underberg.

The small, 20 ml bottle wrapped in brown paper has helped many a man and woman after a good meal. Its secret aromatic herbs from 43 different countries has been proven by the Medical Consult in 2005 that Underberg stimulates the digestive system. It also boasts no added sugar, which rules the spirit from Rheinberg out as an amaro or herbal liqueur, instead it comes under the category of bitters.

But how did Underberg come about? And why does it boast such an after-dinner claim?

The year is 1846, and a gentleman named Hubert Underberg I has been spending time developing the unique herbal product that what we now know as Underberg. He had been using inspiration from his education in the Netherlands and Belgium as he became acquainted with herbal elixir which the landlords diluted with Genever in whatever amount they thought appropriate. Not being a lover of the resulting random composition and fluctuating quality, he worked to create a drink that would combine herbs with modern methods of production (resulting in his motto ‘SEMPER IDEM or ‘always the same quality and effect’). Despite a halt in production with the First and Second World Wars (not the easiest of times to gather ingredients from 43 different countries), Hubert’s grandson Emil decided to reinvent the brand in September of 1949.

The decision to house Underberg in 20 ml bottles only (effectively a single-portion) was unique. Despite many a counterfeit of the original larger bottles being filled with cheap imitations, Emil began the slogan ‘Underberg, the portion of well-being!’ to differentiate between. To this day, the Underberg family are still in control (now into its fourth and firth generation) and are the only ones to know the herbs uses within each bottle. What we do know is, Underberg, after being distilled, is matured in casks made of Slovenian oak.

Sweet honey on the nose, with soft herbal aromas blending nicely for an inviting sip. A developing, fresh herbal flavour of aniseed, honey and fennel on the palate, creating a long finish that shows no hint of dryness. Smooth with a hint of sweetness.

I think you’ll be surprised. Underberg really does the trick, and definitely helps you on your way to enjoying the rest of your night after a good meal! Grab yourself some bottles for Christmas and throw your worries away.