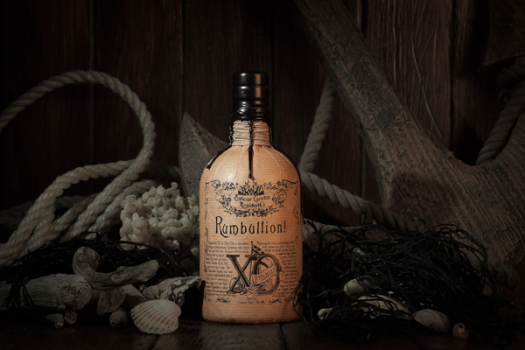 This fabulous spirit is a 15-year-old version of Professor Cornelius Ampleforth’s award-winning spiced rum which was launched to critical acclaim in 2011.

Based on a blend of top-quality, rich 15-year-old Caribbean rum, Rumbullion! XO is flavoured with an intense mix of fresh cinnamon, cloves and cardamom, with a luxurious helping of creamy Madagascan vanilla and a zesty helping of orange rind.

Since its 2011 release, the original Rumbullion! has received numerous awards including a Gold medal at the prestigious 2014 Rum Masters. This new XO 15 year old edition includes all of the award-winning flavour of the original, but with an added dimension of complexity and depth thanks to the incredibly old rum in the recipe.

Each bottle is wrapped in crinkled brown paper, featuring a print of a hand-drawn illustration depicting the flag of the Royal Navy, as well as the various spices and flavours used in the recipe. The bottle necks are wrapped with twine, and each bottle is individually dipped in black sealing wax.

This superb rum can be enjoyed neat, though it is also rather good when served with ice and a squeeze of fresh lime.