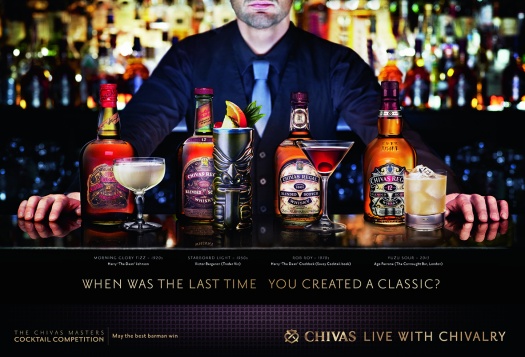 On Tuesday 15 July 2014 in New York City, Chivas Regal, the world’s original luxury whisky, will announce the global winner of the inaugural Chivas Masters competition.
Launched earlier this year, the competition has seen the world’s best bartenders from 13 countries compete for the title, whilst in search of the next generation of classic cocktails. Throughout the competition competitors have been asked to craft a modern classic drink inspired by four great cocktail eras; the Classic Age (1880-1920) the Post War Boom (1945-1965), the Disco Years (1975-1990) and lastly the modern Age of Revivalism.

Over the course of the two-day final, a panel of industry experts will conduct a series of workshops and challenges to test the creativity, style and mixology skills of the competitors. Max Warner, Chivas Global Brand Ambassador will be joined by an esteemed panel of judges including Ago Perrone, Director of Mixology at the Connaught Bar in London to select the final Master. The judges will be assessing competitors on performance, knowledge of cocktail culture and creativity, and will be looking for a cocktail that can stand the test of time to become the next cocktail classic.

The winner of the Chivas Masters title will be announced at a cocktail evening at Nomad, New York, and will be presented with a grand prize on the night of 15th July. All competitors taking part in the competition will conclude their trip with a visit to the world’s premier cocktail festival ‘Tales of the Cocktail’ in New Orleans, where Chivas is sponsoring the Best American/International Cocktail Bar at the Spirited Awards.