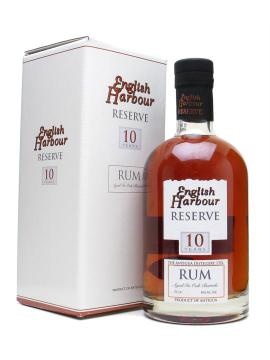 English Harbour is a brand name of rum that may not be familiar to some, but to most rum lovers, it’s seen as a treat. There are not many places you would find that stock English Harbour, but to come across it means it’s a brand that needs care and attention. But why? Lets dive in a little.

English Harbour rum is produced within the Antigua Distillery, located on Antigua within the West Indies. The distillery itself was founded back in 1932 by a group of Portuguese traders and they utilised old distillation equipment from the previous century. Originally, the distillery was operated on a small piece of land named as Rat Island, but today the distillery stands next to the docks near the capital city of St John’s. The Portuguese grew their business by acquiring a sugar mill and several associated estates, ensuring they had a constant supply of muscovado molasses which was essential to one of their main rum products, Cavalier Muscovado Rum, or Cabellero Rum as it was originally named. After World War 2 and the collapse of the sugar economy in the Caribbean, the sugar mill closed but in the early 90s, English Harbour Antigua Rum was introduced.

So how do you create such a brand as English Harbour?

The distillery itself now uses molasses from other areas, and utilise what they call a fast fermentation process. Once fermented, it is distilled within one of the few copper continuous stills left in the Caribbean and then aged in small 220 litre charred American oak barrels, before being bottled with blends of both dark and light rums depending on the finished age.

So how does it fare? Well below I give to you my tasting notes on my experiences of English Harbour so far –

Blended from rums aged between 10 and 25 years. A thick nose of Demerara with hints of fudge, smoke and caramelised banana. Light initially on the palate, before becoming enriched with dark fruits, caramel, toffee and green apple. Slightly spiced as it nears the long, fresh finish that is lined with honey.

A cracking dram of rum here, with others within the English Harbour range including a 5 year and a rather rare 25 year. I’ve heard the 5yr is a masterpiece in its own right, so I look forward to experiencing when I can. In the meantime, grab a bottle of something a bit different from an island that gets overlooked when talking about the production of rum. Oh and the name? Well English Harbour is named after the famous Antiguan naval port of English Harbour; an 18th century theatre of war for Britain and France as they battled for world power. So you can feel historic when sipping!

One thought on “English Harbour”