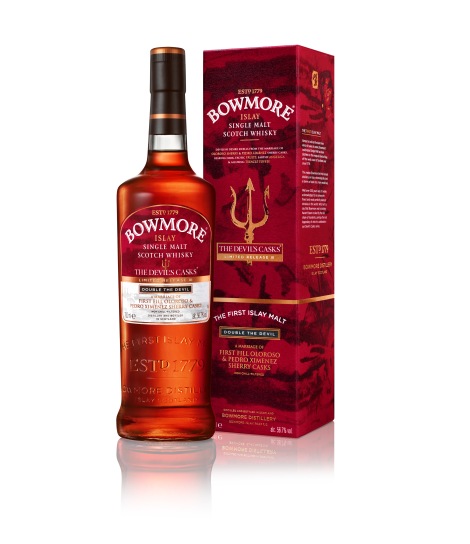 On a clear night, a cold westerly breeze off the coast of Scotland will carry you to the remote and rugged isle of Islay, an island which legend has it that was once the home to the Devil himself. On previous sightings, it is said that the Devil was chased through the village of Bowmore into the gates of Islay’s first distillery. Every inch was searched, but the Devil was nowhere to be seen; he was thought to have escaped inside a cask of Bowmore®, bound for the mainland. As the story of The Devil’s Casks unfolds further in this third and final chapter, the Devil’s plot creates an unprecedented twist.

Having returned to Islay once before (The Devil’s Cask II), the Devil has mastered the art of illusion this autumn with the sighting of a second devil. For the first time the whisky has matured in not just one, but two types of sherry casks, marrying dry Oloroso sherry casks and sweet Pedro Ximénez sherry casks to give the expression an incredible intensity and richness that tempts whisky fans with double the complexity and double the flavour.

To leave his mark on Bowmore and to be forever immortalised on the island, the Devil’s cunning escape has created a beguiling liquid that will taunt and tease with its double personality, which will be irresistible to all who come to taste it:

Devil No.1: Pedro Ximénez Sherry revels in its sweetness as the grapes are dried in the Spanish sun producing intense aromas of chocolate and coffee.

Devil No.2: Dry Oloroso Sherry captivates with its dark, fruity aromas with notes of figs and raisins, resulting in a smooth, dark and indulgent liquid.

The two first-fill sherry matured whiskies are expertly married (delicately blended together and rested) after having being laid to rest in Bowmore’s No. 1 Vaults, the oldest maturation warehouse in Scotland.

Breathe in a wave of rich, dark, exotic fruits, including sultanas, mangos and raisins, fused with earthy angelica root and treacle toffee. Give in to temptation and sip the smooth, rounded taste of dates, chocolate fudge and salted treacle, warmed by orange-laced Aruba coffee. Finally, savour the powerful, long-lasting finish of smoked fruitcake, blood orange and sea salt. Devilishly rewarding and a great addition to any whisky collection, this limited edition release not only tells a tale, it spells the end.

One Reply to “Discover The Last Edition In The Legendary Series: The Devil’s Casks III”