Jameson has unveiled a new structure to its family of Irish Whiskeys, representing a unique re-interpretation of the super-premium whiskey category. The new portfolio is made up of The Whiskey Makers Series, the range of Heritage whiskeys and The Deconstructed Series with the original Jameson Irish Whiskey at the core. Together, the new portfolio showcases the brand’s rich heritage, celebrates its remarkable present and shares an insight into its innovative future, underpinned by our communications platform of Sine Metu.

The restructure manifests Jameson’s ambition to drive interest globally in Irish Whiskey, a trend that has been led by the brand in recent years. The new family of whiskeys is set to further impact this movement, highlighting Jameson’s wider offering and giving drinkers a meaningful exploration path into super premium whiskey. With a strength of storytelling throughout the range, the new portfolio is rooted in the interests of Jameson’s fans who are seeking to learn more about the people and craft, heritage, taste and ethos of fearlessness behind the brand.

Daniel Lundberg, Global Brand Director for Jameson, comments: “The restructure of the Jameson family is the most significant move in our brand’s recent history. This is an exceptionally exciting development that positions Jameson at the forefront of innovation and advance within the Irish Whiskey category. The family, comprised of The Whiskey Makers Series, the range of Heritage whiskeys and The Deconstructed Series is underpinned by the brand’s people and craft, heritage, taste and fearlessness; in short, the qualities for which Jameson is celebrated throughout the world. Today we finally get to unveil our new family globally and witness Irish Whiskey fans discovering new stories, flavours and experiences from Jameson.”

A brand new range of super-premium Jameson whiskeys – The Whiskey Makers Series – sits within the refreshed family and is comprised of three whiskies that celebrate the people behind Jameson and their craft. Created collaboratively by Jameson Head Distiller, Brian Nation; Head Cooper, Ger Buckley; and Head Blender, Billy Leighton, the range gives Midleton’s craftspeople a unique opportunity to shine a light on their individual areas of expertise. The Whiskey Makers Series is set to deepen consumers’ understanding of Irish Whiskey production through the exploration of three key tools, after which the products are named: The Distiller’s Safe, The Cooper’s Croze and The Blender’s Dog.

The Distiller’s Safe celebrates the role of Jameson’s Head Distiller, Brian Nation, and is a true showcase of the original copper pot still distillate. A purist of whiskey making, Brian explores the influence of the copper on the new-make spirit, using a maturation process that skilfully preserves the qualities of the original distillate, allowing the flavours developed in the pot still to take centre stage. Brian’s tool of choice – the spirit safe – allows him to fine tune the whiskey’s style at any point during the distillation process and the resulting blended whiskey carries distinct sweetness from barley sugar and gentle notes of apricot, cinnamon and melon. A smooth, light whiskey with a luminous, zesty finish.

The Cooper’s Croze showcases the role of Jameson’s Head Cooper, Ger Buckley, and explores the influence that maturation in casks has on whiskey. A fifth generation cooper, Ger has a deep relationship with wood and is tasked with selecting, repairing and maintaining Midleton’s diverse and treasured barrels. Ger’s prized possession – a croze – passed down through his family, is used to make the groove where the head of the cask is positioned. The resulting blended whiskey is matured in virgin American oak barrels, seasoned bourbon barrels and Iberian sherry casks, a combination that delivers vanilla sweetness, rich fruit flavours and a balance of floral and spice notes.

The Blender’s Dog celebrates the role of Jameson Head Blender, Billy Leighton; a tribute to the fine art of blending. A master at matching whiskeys across ages and characters, Billy is tasked with uniting the crafts supplied by distiller and cooper to create harmonious, perfectly balanced whiskeys. Billy’s go-to instrument – a ‘dog’ – is used to collect whiskey samples from the casks, allowing Billy to bring together complementary spirits from Midleton’s extensive range of maturing stock. The Blender’s Dog is a perfect balance of spirit, wood and time; a rich, rounded whiskey with butterscotch sweetness, spices, tannins and an exceptionally long finish.

The range of Heritage whiskeys

The range of Heritage whiskeys is a new collection of super-premium Irish Whiskeys that bring to the fore over 200 years of remarkable stories and milestones from the brand’s rich history. Created to better highlight three world-renowned Irish Whiskeys – Jameson Black Barrel, Jameson Crested and Jameson Signature – each expression in the range tells a different story from Jameson’s past.

Jameson Black Barrel is a triple-distilled Irish whiskey that pays tribute to the cooper’s method of charring barrels for a second time. Charring is a traditional method for invigorating barrels, although today at Midleton double-charred barrels are used by choice rather than through necessity. The expression uses a blend of ‘small batch’ grain and traditional pot still Irish Whiskey, which is distilled just once a year at Midleton, and is matured in a combination of American oak, sherry casks and double-charred bourbon barrels. Time spent maturing in these barrels imparts the whiskey with intensified notes of vanilla sweetness and caramel, alongside toasted wood, fruit, and warm spice.

Jameson Crested, launched globally in March 2016, is a triple-distilled Irish Whiskey that celebrates the first drops of whiskey to be bottled, sealed and labelled at the Bow Street Distillery in Dublin, marking the moment in time (1963) when Jameson took full control of the whiskey making process, from grain to glass. Up until then, distillers – including the Jameson Distillery – sold barrels of whiskey to bonders to bottle themselves, however, reports of whiskey bonders watering down their whiskey in the 1960s led Jameson to complete the process inside the distillery walls to protect the quality of the whiskey. Jameson Crested brings together rich pot still Irish Whiskey and grain whiskey, matured in a high proportion of sherry casks, as well as bourbon barrels. The result is a nose of vivid sherry and pot still aromas, a palate of toasted wood, spice and chocolate, and a warm, lingering sherry finish.

Jameson Signature is a triple-distilled Irish Whiskey that bears the signature of John Jameson, a mark of quality that has appeared since the early days of the Bow Street Distillery, when all casks were signed off by John Jameson. The expression celebrates this tradition and the generations of meticulously transcribed distillers’ notebooks, a sign that attention to detail remains at the heart of Jameson. Jameson Signature is a commitment from the brand to uphold the founder’s core values of craftsmanship and quality, with a robust and complex whiskey that boasts deep flavours of cedar, vanilla, citrus and dried fruits and a smooth balance of honey. 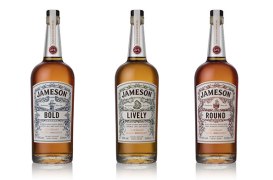 The Deconstructed Series is a range of super-premium Irish Whiskeys that explores the key flavour notes of the original Jameson Irish Whiskey. Launched in Cannes in October 2015, the expressions – Jameson Bold, Jameson Lively and Jameson Round – are named after three key taste characteristics found within the family’s core expression, amplifying each flavour trait to offer three new drinking experiences.

Jameson Bold, influenced by pot still whiskey, is an intense and robust whiskey, with a strong influence of spices. Initially sweet and creamy, with an abundance of soft fruits, the pot still spices develop to bring a perfect balance of rich barley notes and mellow baked apple.

Jameson Lively, influenced by grain whiskey, offers an elegant and floral taste combined with a citrus lightness. Its soft and sweet taste, provided by the perfume bon bons alongside turkish delight, combines with drying hints of citrus to balance the sweetness. A little chilli oil brings a prickle of spices to the mouth.

Jameson Round, influenced by the wood contribution, is a balance of rich and plump charred wood tones. A perfect harmony of diverse flavours, sweet vanilla fuses with soft ripe fruit and, together, combines with the rich Pot Still Spices on a firm foundation of toasted oak.