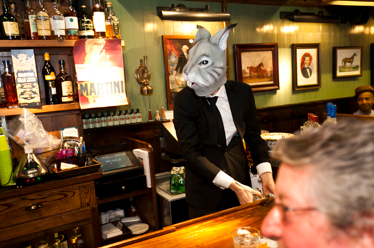 In May 2014 the 2 best bars in the world from the 2 cocktail capitals in the UK and USA, Artesian bar at the Langham Hotel from London and Dead Rabbit Grocery and Grog from New York, went head-to-head to battle for the illustrious title of the Martini & Rossi World Cocktail Bar Champion. Sponsored by world-famous vermouth, Martini, the innovative contest took place in New York’s financial district and included 3 fighting rounds of cocktail creation and fiercely competitive barmanship.

Carrying the pride of their country on their shoulders, Artesian was represented by award-winning mixologists Alex Kratena and Simone Caporale, who went mix-to-mix and shaker-to-shaker in cocktail combat against Jack McGarry and Bobby Hiddleston from Dead Rabbit.

Fuelling the across-the-pond rivalry, both teams had the audience and judges captivated throughout the energetic competition with entertainment including firecrackers and cabaret outfits. A unique mix of ingredients was also used in combat, including everything from Palma ham, Pessione cedarwood syrup to Orinoco bitters.

Round 1 involved the full team from both bars creating a punch inspired by Jerry P Thomas’ famous vermouth cocktail. Serving 60, Artesian created the standout BUGS BUNNY WAITING TO BECOME DEAD RABBIT, while Dead Rabbit served an exceptional BUNNY PUNCH, both which were judged on originality, presentation and refreshment.
Round 2 featured a speed challenge with 1 bartender from each team undertaking some of the trade’s most complex and iconic cocktails including the Americano, Negroni Sbagliato, Bobby Burns, Tipperary and Floridita #3. With a composite list of ingredients and definitive process, extra points were gained for observance of the original recipe, depth of flavour and time.

Finally, the concluding round was creativity. Contenders were challenged to create an aperitif that was judged on its originality, taste, refreshment, presentation and of course, creativity.

Although it was close, the exceptional ability and creativity of Kratena and Caporale, Artesian earned them the title of crowned the Martini & Rossi World Cocktail Bar Champion. However this acclaimed accolade was only narrowly missed out on by hosting Dead Rabbit bartenders McGarry and Hiddleston and there is already talk of a rematch.

Giuseppe Gallo, MARTINI Global Brand Ambassador and one for the 4 judges commented, “MARTINI is all about innovation, excellence and style, and all three things were seen in excess during this competition. I have never been to a competition with quite as much raw talent on show. Watching the best mixologists in the world entertain the crowd, mix phenomenal concoctions and have so much fun is a priceless experience!”