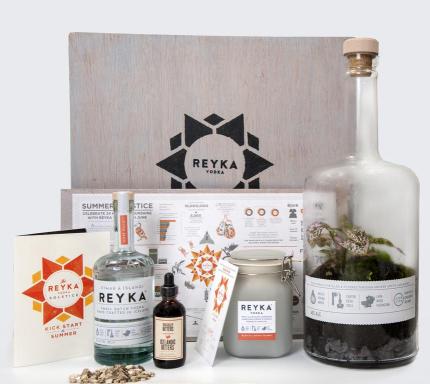 The summer solstice is a national holiday in Iceland. In ‘the land of the midnight sun’, locals make the most of the 24 hours of continuous sunshine by packing in as many dinners, parties and festivals as possible.

Reyka, Iceland’s first vodka, is celebrating the holiday in the UK with summer solstice kits which have been placed in top bars to encourage bartenders to create innovative cocktails for the longest day of the year.

60 kits will be made available nationwide. The rugged packing crate contains information on the summer solstice and Iceland, sun jars, a terrarium, Reyka Icelandic bitters and a flavour mapping cocktail guide.

UK Reyka Brand Ambassador, Joe Petch will be visiting accounts using the Reyka summer solstice kits looking for creativity and inventive serves, and the top six bartenders will win a trip to Iceland to visit the home of Reyka vodka.
Alongside the on-trade kits, Reyka has created a series of solstice cocktails to encourage celebration of this year’s summer solstice in true Icelandic style. Eight Reyka cocktails have been developed, each with an inventive twist, taking inspiration from Iceland’s 24 hours of sunshine over the summer solstice.

Senior Brand Manager for Reyka vodka at First Drinks, James O’Connor commented: “Summer solstice is a major event in Iceland and a real source of creativity and inventiveness for islanders. We want to bring this spirit and energy to the UK with Reyka, and share it with UK bartenders.
“Vodka is still the most popular spirit in the on-trade and we’re seeing top bartenders getting more and more creative with it. We’re excited to see the kinds of serves the kits inspire and look forward to sharing the Icelandic experience with the six winning bartenders.”
Celebrated on Saturday 21st June this year, the summer solstice is a significant event in the Icelandic calendar. The day is marked with 24 hours of celebrations, festivals and activities.