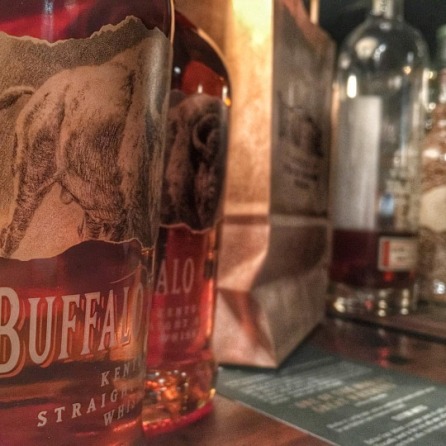 Last week, the Buffalo Trace Trail came into Manchester as it meanders its way across the UK. Working alongside restaurants within key cities such as London and Liverpool, UK Buffalo Trace Brand Ambassador Tim Giles hosted an evening at the ever-popular Hawksmoor, a venue that Time Out has said is “a place to blur day with night over cocktails and the country’s finest meat”.

With a focus on their 2015 Antique Collection, including expressions such as Eagle Rare, Sazerac and Thomas H Handy, the team at Hawksmoor came up with a fantastic menu, complimented by Buffalo Trace serves from the bar team.
Starters included short-rib nuggets with kimchi, fried oysters with tartar and roast beetroot salad with Dorstone, enjoyed with a serve named ‘Zenith of Man’ which saw Buffalo Trace paired with Pimento Dram, PX, apple and mint.

Entwined between courses was a short look into Buffalo Trace by both Tim and Ross Thompson of Buffalo’s UK distributor Hi-Spirits, before indulging into the main course of a Hawksmoor burger with Ogleshield, triple cooked chips and vinegar slaw, showed off with a serve from the bar named ‘Trace It Back To Bill’, which saw Buffalo Trace roast plum and pepper syrup, soda and lemon come together.

For pudding, a delicious honeycomb sundae paired with with the ‘Trailblazer’; Buffalo Trace, Tawny port, Chartreuse and bitters that worked well to finish the evening in style.

Tim and Ross introduced the 2015 Antique Collection by Buffalo Trace. 5 expressions of highly commended and award-winning liquids, with enough for one or two drams to really finish the evening!

An evening such as this really got the audience in attendance looking at Buffalo Trace in a different way, as the 3 courses by Hawksmoor worked perfectly with the Buffalo Trace serves created by the bar team (special thanks to Richie West and Anthony Hogan). With a look at the Antique Collection, it really made the evening a special one, and a potential break of the bank as I now search for a bottle of the Thomas H. Handy!

One thought on “The Buffalo Trail Stopped For Food At Hawksmoor”