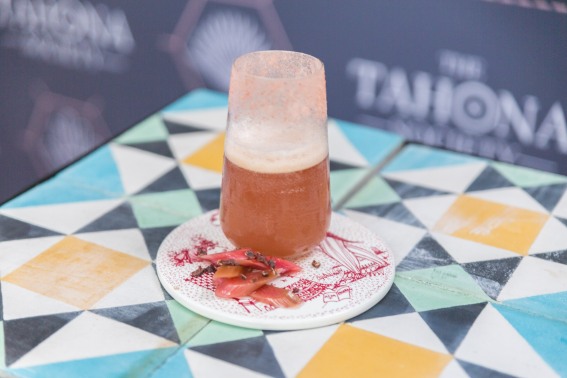 Altos Tequila has crowned Jeppe Nothlev, from bar Helium in Copenhagen, Denmark, as the winner of The Tahona Society Cocktail Competition 2017. Nothlev impressed the judging line-up with his Sweet Effort cocktail, crafted from Altos Plata Tequila, which represents a balance between the history, culture and ingredients of Denmark and Mexico.

Mix the Altos Plata, Pedro Ximénez Sherry, rhubarb syrup, lime juice and egg white, shake and pour into a highball glass and top with grapefruit lemonad
Bringing to life the sustainable values at the heart of Altos Tequila, Nothlev reduced wastage by drying and crushing the spent rhubarb and mixing it with salt to craft a garnish and then sprayed an infusion of Altos Plata and used lime husks on top to pack an additional Tequila punch.

Nothlev commented: “It has been a hard-fought competition over the last week, so it’s a great honour to have been crowned the winner of The Tahona Society Cocktail Competition 2017. Coming to Mexico and learning about its street food culture, Altos’ sustainable values and, of course, Tequila has been a life-changing experience and it has made me a stronger bartender, which I hope the judges saw in my final creation, Sweet Effort. This experience has given me so much inspiration for the coming year and I can’t wait to begin spreading the word about Tequila, Altos and The Tahona Society.”

After winning his local The Tahona Society Cocktail Competition heat in Denmark in August, Nothlev travelled to Mexico to compete with 24 other finalists from countries including the USA, Colombia and Belarus and claimed victory after a week of challenges that tested participants’ cocktail creativity, ability to blind-taste Altos Tequila and presentation skills. As a prize, Jeppe Nothlev has become The Tahona Society Global Ambassador and will be given the opportunity to host educational The Tahona Society programmes for fellow bartenders around the world in the coming year.

Second place was awarded to Egor Kozlovsky , from Minsk (Belarus), while Ana Milena Alzate and Aj Snetler, from Bogotá (Colombia) and Cape Town (Africa) respectively, were awarded joint third place. For the first time ever, the top four will return to Mexico next year to craft a limited edition Altos Tequila bottling with Maestro Tequilero, Jesus Hernandez.

Now in its seventh year, The Tahona Society is the world’s leading Tequila education programme. The 2017 competition challenged bartenders to craft a new and innovative cocktail that championed Altos Tequila’s sustainable values while appealing to fans of the growing Mexican culinary and street food revolution. To assist their preparation for the finale and career beyond the competition, contenders were schooled in various areas key to running a modern, successful bar business, such as sustainability and global drinks trends, hosted by leading figures in mixology including Kelsey Ramage, ex Dandelyan bartender, spokesperson for her own Trash Tiki project and winner of The Tahona Society Cocktail Competition 2016.

Head judge, Dré Masso, remarked on the overwhelming talent of the entrants in The Tahona Society Cocktail Competition 2017 final: “It has been a privilege to bring together such an outstanding and passionate group of bartenders and watch them compete for this year’s The Tahona Society Cocktail Competition title. In the end, only one bartender could win and we chose Jeppe as he demonstrated imagination and a clear link to Altos Tequila’s values of brotherhood and sustainability – congratulations Jeppe!”