There’s many a spiced rum out in the world, but one of the newer brands that is getting a bit of publicity and bartenders talking, is Rebellion Spiced. But why is this? Well after a bit of digging, here’s what i found –

Rebellion Spiced is a blend of Caribbean rums (i’ve been reliably informed that they are located very close to Grenada) with the added fresh spices of cloves, bitter orange, ginger, cardamom, cinnamon, nutmeg, pepper and vanilla, and a name that is a nod towards the pirate punishment of marooning. Legend has it that following a rebellion, the notorious Edward Teach (or Blackbeard as he was more commonly known), was rumoured to have marooned 15 of his men on Dead Man’s Chest with only a cutlass and a bottle of rum. It’s quite fitting then that on every bottle of Rebellion Spiced, there is a signed label from Edward Teach saying that the bottle consists of the spices mentioned above.

So with a nod to piracy, how does it fare? Well below, I give to you my tasting notes – 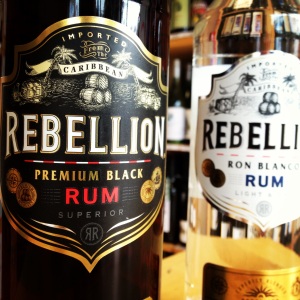 Fragrant nose of vanilla with hints of cinnamon slowly arising. Smooth on the palate with the spice developing over the short offering. The cinnamon is more apparent near the end and gives a slight warmth.

And how about the rest of the range?

Lots of aromas of soft caramel on the nose with an incredibly soft palate that grows into a subtle spice. Sweet notes of toffee linger and dries out the experience, although lingers.

Faint caramel and toffee aromas blend on the nose with a slight dark fudge following. Salt flavours come through mixed in with the fudge on the palate. Light with a thin texture that lingers with a slight warmth on the finish.

All a good tot on its own, especially the Ron Blanco, but also a range that makes me think that a simple Cuba Libra is all that is needed if you wanted to mix –

Pour Rebellion Spiced over ice and top with Cola and garnish with a slice of lemon.

Easy, simple, well-balanced. If you ever try, you can also be in the knowledge that in 2012, Rebellion Spiced Rum, Blanco and Premium Black Rums were each awarded a Silver Medal at the International Wine and Spirit Competition. Need i say more!

Check out the rest of the photos, taken at The Circle 360, via my Facebook page.