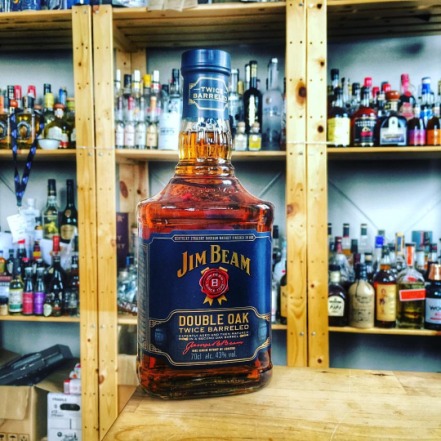 Jim Beam has been a staple of many a bar for many a year now, so much so that they themselves have the tag ‘The World’s No. 1 Bourbon’ stamped on every bottle. But how does a brand come to call itself that? A brand that, from my knowledge, not many people know much about? Well lets dive into the history of this supposed number one and see what comes out the other end.

Our journey starts in 1740 and the migration of the Boehm family from Germany. Translate the surname and you get the worlds ‘hell’, so a change to ‘Beam’ started the etching into bourbon history books. In 1788, Jacob Beam settled in Kentucky and set about experimenting with the corn and grains that grew on his farm. This blend of ingredients were run through a still, aged in barrels and eventually became bourbon, possibly named after Bourbon County, Kentucky. 1795 saw the year of the first ‘Jim Beam’. David Beam took over his father’s responsibilities in 1820 at the age of 18 and during his reign, America was undergoing an industrial revolution. With the country expanding itself and finding new and innovative ways to not only communicate and travel, but transporting of goods, technology such as the telegraph, steam-powered ships and the opening of waterways and railroads aided the expansion and distribution of the Beam’s family bourbon.

David M. Beam was handed the reins to the family business in 1850 and four years later, in order to be near Kentucky’s first railroad, David M. Beam moved the distillery to Nelson County. Three years after civil war broke out, David’s son James B. Beam came into the world and the family, with a real dislike for his name. Apparently a man who liked to keep things simple, he introduced himself as Jim Beam. After taking over the business from his father, the business thrived.  Once the end of Prohibition in the US in 1933, Jim Beam wanted to carry on the tradition of the original recipe from the days of Jacob Beam, so he built and moved to a new distillery in Clermont, Kentucky taking 120 days. From this point forward, the bourbon was called ‘Jim Beam Bourbon’. Son Jeremiah Beam joined the company at the same time as the opening of the new distillery and earned the title of master distiller. With his passion, he travelled the world to share his knowledge of bourbon and the Beam family legacy. After the death of his father, Jeremiah continued to grow the business, opening a second distillery in 1954 near Boston, Kentucky, which is still in use today.

Jim Beam’s grandson Booker Noe maintained the Beam family’s commitment to quality. As the Master Distiller Emeritus at the Jim Beam Distillery for more than 40 years, Booker introduced his own namesake bourbon in 1988 – Booker’s. Booker’s was the world’s first uncut, straight-from-the-barrel bourbon, and the first of the legendary Small Batch Collection. Upon the death of Booker Noe, his son Frederick Noe took over the reigns of the Master Distiller and is still in the position today.

Since the birth of Jacob Beam, the Beam family legacy has influenced 60 different bourbon brands in three countries.

Not bad. And it’s great to see after all these years, the brand is still within the family. But with longevity comes consistency, and consistency means a rigorous check of the production method. The following is taken directly from the Jim Beam website as I found that the process would be better understood as they have written it.

Much has been said about Central Kentucky’s water. It’s famous for making fast horses, pretty women and good bourbon. (We’ve also heard it as:, pretty horses… but the good bourbon never changes.) Because we’re sitting on top of a limestone shelf, our water has a natural filter. This creates an iron-free, calcium-rich water that’s perfect for making bourbon. Perhaps that’s why 98% of all bourbon distilleries are located here.

The Secret Is Yeast

Our jug yeast is a closely guarded family secret. It’s the same strain of yeast we’ve used in our bourbon-making process since prohibition ended. It’s more than 75 years old—and it ensures the same Jim Beam® bourbon consistency in every bottle. So the bottle of Beam® in your granddad’s hand in that picture from his fishing trip in 1953? Same DNA as the bottle you can buy right now just about anywhere in the world. Our yeast is so important to us that Jim Beam used to take some of it home with him on the weekends, a tradition that continues today with Jim Beam’s great-grandson and seventh generation Beam family distiller, Fred Noe. We put the jug yeast in a tank and feed it a hearty diet of ground up grains to create “dona yeast.” We use this yeast in the fermentation process once we’ve cooked our mash.

Hammer mills grind our “mash spill”—our top-secret mix of corn, rye and barley malt. Milling breaks it down for easier cooking. The mash spill feeds into a 10,000-gallon mash cooker. Here we add some of that pure limestone-filtered Kentucky water, along with some “set back”—25% of the old mash from the last distillation. This is the “sour mash” part of our bourbon-making process—ensuring the same Jim Beam® Bourbon from batch to batch.

From the cooker, the mash heads to the fermenter. We cool the mash down to 60-70°F and add our 75-year-old yeast strain to the mix. And the yeast eats. And eats and eats and eats, feeding on sugars in the mash, heating the fermenter as it eats and multiplying as it goes. The upshot of all this activity? Carbon dioxide and more importantly for us, alcohol. This transforms the mash into “distiller’s beer.” Because it looks, smells and tastes like a rich, light beer.

The beer travels into our 35-foot-tall column still. We heat it to about 205°F, which is hot enough that the alcohol turns into a vapor that rises up the still, but not so hot that the beer boils. As the vapor cools and falls, it turns back into a liquid. This “low wine” is 125 proof (62.5% alcohol) of strong-willed goodness. From the column still, the low wine flows into the doubler for a second distillation in our pot still. It gets heated and condenses into “high wine”—at a paint-peeling 135 proof (67.5% alcohol).

After distilling the bourbon, we tap the high wine into brand new charred American oak barrels. We like our barrels to have what we call “alligator char”—that is, they’re fired enough that the insides take on the scaly, bumpy look of a gator’s skin. Each barrel holds about 53 gallons (more than 500 pounds) of what will be the the world’s finest bourbon. The loaded barrels are rolled to rest in one of our airy hilltop rackhouses. As the seasons change, Kentucky’s climate expands and contracts the barrel wood, allowing bourbon to seep into the barrel. And the caramelized sugars from the gator-charred oak flavor and color the bourbon. Throughout the bourbon making process, a fair portion of the 53 gallons of bourbon escapes the barrel through evaporation or stays trapped in the wood of the barrel. We call this the “angel’s share” or “Booker’s share.”

Jim Beam bourbon ages for at least four years—twice as long as the U.S. government requires.

So there we have it. A fascinating history, one that I myself have only realised has influenced so many bourbon distilleries and brands to this day, and a production method that creates such a varied range. I’ve been lucky enough to try a couple of the range lately, therefore below I give to you my tasting notes –

Aged for 4 years. Light vanilla notes on the nose with a sweetness slowly appearing. Vanilla carries onto the palate, mixed with a little spice that leads to a lengthy finish. Slight touch of oak lingers.

Through a slow infusion process, four-year-old Jim Beam Bourbon infused with natural flavours. Sweet, ripe dark cherries on the nose with a sugar ladened palate of cherry on the palate with a cinnamon spice to finish. Amazingly long, and a little dry at the very end.

Aged for 6 years. Soft vanilla on the nose with hints of orange lingering. Smooth on the palate with a hint of spice, honey and toffee creating a long finish.

Aged for 12 years. Plenty of red fruit, smooth on the nose with hints of cherry near the finish. Rich on the palate though, with a slight spice but a long, bold finish with a little dryness. A couple of sips makes this a cracking dram.

Launched in April 2016, this expression is first matured in new charred American white oak barrels before being transferred into a second freshly charred oak barrel for a further period of ageing.
A nose of vanilla and caramel blended with freshly cut wood. Rich notes of oak, followed by scorched wood, vanilla and intense red fruits that leads to a long, slightly dry finish.

Jim Beam isn’t just for a great sip, it can also be housed within a cocktail –

In an Old Fashioned glass, add the sugar cubes and bitters along with a little bourbon and ice. With a bar spoon, muddle and stir the liquid so the sugar starts to dissolve – repeat until complete. Then, cut a thin slice of peel from the orange. Pinch the orange peel and rub around the rim of the glass to coat with citrus oils. Repeat with the lemon. Garnish with the orange and lemon twists

Combine all ingredients with cracked ice in a cocktail shaker. Shake well. Strain into a chilled cocktail glass.

Soak cherries and raisins in Jim Beam Bourbon overnight. Grease a 10-inch tube pan and line with brown paper or parchment. Preheat oven to 275 degrees. Sift flour and reserve 1/2 cup. Cream butter and sugars until fluffy. Add egg yolks and beat well. Add soaked fruit and the remaining liquid, 4 1/2 cups flour, nutmeg, and baking power to butter mixture. Stir to combine. Beat egg whites by hand or with an electric mixer until they just barely hold stiff peaks. Fold into batter. Toss nuts with 1/2 cup reserved flour and fold into batter. Pour batter into prepared pan. Bake 3 to 4 hours or until cake tests done. Remove from oven, cool slightly and turn onto rack to cool completely. To store when thoroughly cool, place in tightly covered container. Stuff centre hole with cheesecloth soaked in Jim Beam Bourbon. Drink any extra Jim Beam®. Wrap in heavy wax paper. It isn’t necessary to soak the cake in Jim Beam® Bourbon as it will be moist and flavourful. Keep very cool, in refrigerator if necessary. Makes 15 servings.

So not only is Jim Beam rich in history, it also shows off with its range as well as its versatility within both cocktails and food. What more can you ask for? It really does prove some valuable points for Jim Beam’s statement of being ‘The World’s No1. Bourbon’. See for yourself.