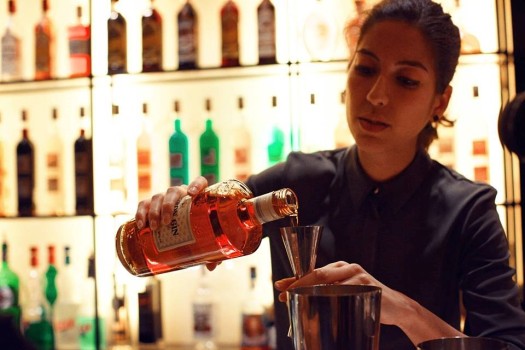 The final of the 2018 Gabriel Boudier Wizard competition has been won by Maria Vieira, of East London Liquor Company

The second national Gabriel Boudier Wizard final was held in Vertigo cocktail bar in Dijon, France on Monday 15th January. The top four finalists were each selected from the regional heats held throughout the UK in 2017.

The competition was setup in 2015 by spirits importers, Emporia Brands. The Gabriel Boudier Wizard competition challenges bartenders to come up with an original liqueur or crème that is not already commercially available. The winning recipe will be put into production by Gabriel Boudier and released internationally later in the year.

Established in 1874, Gabriel Boudier is the only independent producer of liqueurs in Dijon still in family ownership. Their award-winning range is based on fresh ingredients, without the use of artificial flavours, and this philosophy was part of the brief to contestants.

Finalists were judged not only on their liqueur but also on their marketing plan to launch, along with a demonstration of how the liqueur could be used both in a simple serve and in a signature serve.

Maria impressed the judges with a polished presentation, demonstrating a good technical understanding to produce her liqueur with the unique mustard flavour being perfectly balanced in both cocktail recipes.

Drawing her inspiration from the other well know product of Dijon, Maria’s recipe uses both black and brown mustard. Increasingly ‘foodie’ ingredients are finding their way into cocktails and this trend looks to continue in 2018.

Maria took home £1,000 on the night and will now work with Gabriel Boudier over the next six months to finalize the recipe of Mustard Liqueur that will be launched in the UK at Imbibe Live on the 2nd and 3rd July, stand B110.

The next Gabriel Boudier Wizard competition will run in 2019, to find an original liqueur or crème to launch in 2020.