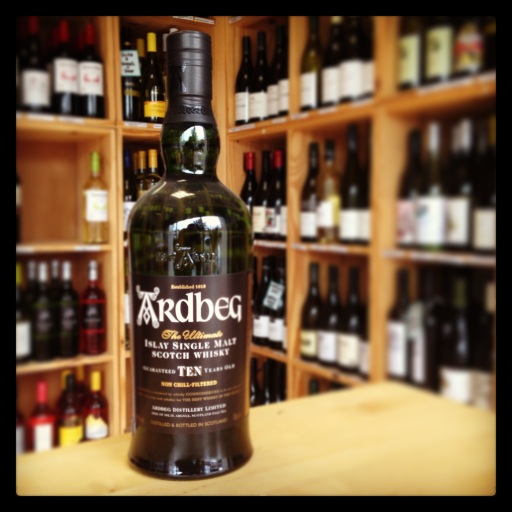 Ardbeg is another name in the whisky world that I have encountered on many occasion, and since we’ve just had Ardbog day (1st June), it makes sense to combine my experiences into one place and discover why Ardbeg won World’s Best Whisky for three years running.

Ardbeg, from the Scottish Gaelic: Àrd Beag, meaning Little Height, is found within a small cove off the south coast of Islay, its home since 1815. A gentleman named John McDougall founded the distillery until handing it over to Thomas Buchanan in 1838, who was a Glasgow spirit merchant, for £1,800. John’s son Alexander continued to manage the operations though until his death in 1853 where the company was then ran by Colin Hay and McDougall’s sisters Margaret and Flora (quite possibly becoming Scotland’s first female distillers). By the early 20th Century, Ardbeg trademarked its name and its distinctive letter ‘A’ after hearing that they are the most productive distillery on Islay.

An uncertain future came during the 20th Century where The Alexander McDougall & Co. Ltd purchased Ardbeg for £19,000 in 1922 before being bought by Ardbeg Distillery Ltd in 1959 and then Hiram Walker in 1977. Unfortunately, Ardbeg stopped production and closed its doors in 1981. Hope came in the form of Allied Lyons purchasing Hiram Walker, but ultimately closed again in 1991. Six years later, the Glenmorangie company purchased the distillery and in less than a year it was voted Distillery of the Year and producing 600,000 litres a year by 1999.

Ardbeg came full circle by winning Jim Murray’s World’s Best Whisky award in 2008 for it’s 10 year-old expression, before again winning in 2009 with Uigeadail and 2010 with Supernova.

So how does Ardbeg come about?

Ardbeg uses water from Loch Uigeadail located three miles away behind the distillery, as well as malt from Port Ellen. Ardbeg are also one of the very few that use a Boby Mill to crush their malt into grist. Boby Mills are extremely rare within the whisky industry and are more commonly found within breweries. After being distilled twice, Ardbeg uses commonly ex-bourbon casks but sherry butts and new French oak barrels are also selected for different expressions.
For a more detailed look into the production method, check out this nifty page.

As mentioned, I’ve been lucky enough to try some of the Ardbeg range, so with this, below, I give to you my tasting notes –

On the nose, a subtle hint of peat mixes with light hits of smoke. Lemon and limes are also swirling slowly. The palate enjoys light, fresh combinations of cinnamon, lemons and limes with a hint of iodine.

A smooth, mellow hint of peat with honey and sugar mixing well on the nose. However the palate has a sharp peat hit mixing with winter spices that mellows quickly to produce a rather short after-taste.

Light, peat iodine notes with lots of herbs and blackcurrant combining well on the nose. A soft blend of cream and spices start well initially, but develops into a rather harsh dance of salt and iodine for a short after-taste.

As you can imagine, Ardbeg isn’t one for cocktails, however it’s not too bad when it comes to being used within a garnish * –

Stir over ice and strain into a small chilled cocktail glass or coupe. Add the garnish so that each drop represents a point of a compass. Squeeze the twist over the drink, then discard.

Well worth a try if your ever in a bar that stocks the Ardbeg range. Or of course stock up at home, you need to raise a late glass to what is turning into an annual Ardbeg day anyway!