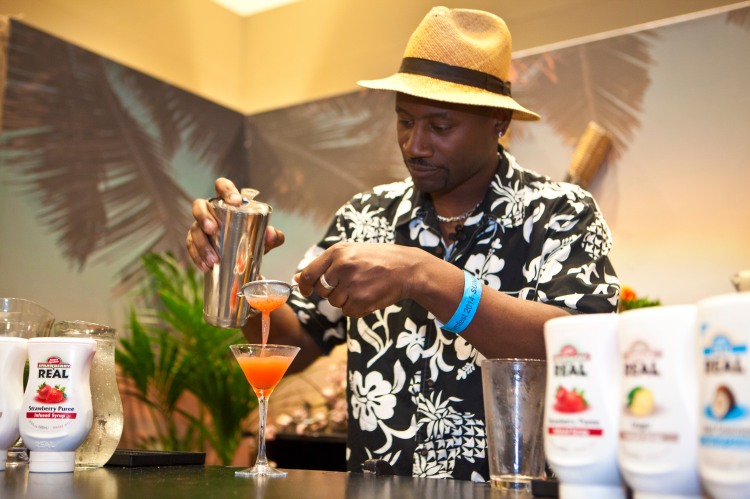 As RumFest fast approaches the rum tickled talent on display at the ILEC, London will host industry heavyweights with barrels of experience set to inform, entertain and captivate. The two day rum extravaganza on Saturday 17th and Sunday 18th October features over 400 of the most diverse rums from across the globe including established favourites Diplomatico, Bacardi, Havana Club, Lamb’s Navy Rum, The Duppy Share, Don Q, Botron and newcomers Gold Of Mauritius, Matugga Rum and Nine Leaves as well as the return of the Golden Tot initiative allowing visitors to taste the rarest and most exquisite blends on the market. Leading master blenders, ambassadors, mixologists and industry aficionados will be on hand to take visitors on a voyage of rum discovery. Golden highlights include Diplomatico master blender Chris Tito, foodie hedonist Vanessa Bolosier of Creole Kitchen delivering vibrant food with a slice of spice, contemporary Caribbean cuisine from Shivi Ramoutar, rum and chocolate pairings, talks and tastings. Tickets are selling fast from £49.95, including a new VIP package priced at £75 that allows for exclusive early entry, a three course Caribbean lunch and goody bag. Tickets and more information are available now from the RumFest website.
“Rum is more than a spirit, it’s a lifestyle”. Global Rum Ambassador Ian Burrell

The countdown begins for the ninth addition of the world’s premier rum festival taking place at ILEC Conference Centre, Earl’s Court on Saturday 17th and Sunday 18th October 2015. Thousands of rum lovers will be treated to blends from all corners of the globe. Whether a Ron Tiburon from Belize, a Le Dom Tom from France or a Nine Leaves blend from Japan, there are over 400 rare and exquisite rums to sip, savour and buy across the two days. Following the success of last year, the Golden Tot tokens return where visitors can pick up a token for just £5 opening the doors to rum’s elite allowing the more serious rum enthusiast to try rums that usually retail for over £200 a bottle.

Away from the tasting shacks and immersive pop-ups will be a series of enriching and tantalising seminars, masterclasses and workshops including the not-to-be missed Cachaca Tasting mapping out its rich history in Brazil and flavours; an introductory level aroma masterclasses; chocolate and rum pairing; a fascinating look at the history of rum; and a series of one-to-one tastings. Top blenders, mixologists and distillers will also be on hand to teach ticket holders the art of cocktail making as well as more ways to enjoy their favourite rums. Whilst one of the most influential and awarded personalities in the rum world, the legendary Tito Cordero, Diplomatico’s Master Blender, will take visitors on a journey through the foothills of the Andes.

Other highlights for 2015 include the return of RumFest’s Auction in partnership with Christie’s auction house. A must see for this year, RumFest is hoping to smash last year’s grand total where over 20 precious and rare rum were sold off for charity. Carnival Hour rounds off the RumFest experience each day in the ultimate party finale, featuring live bands and dancers that embrace the fun and social spirit of rum.

This year for the first time in history The Rum Experience is teaming up with leading bars, chefs, distillers, brands and rum lovers to curate a week long series of events that will take over the capital for the inaugural The Rum Experience Week. Each event will be hosted by a different brand or partner and will show attendees new ways to experience rum, including rum pairings with cigars and chocolate, rum infused cooking classes and exclusive menus, a Thames Tiki rum cruise and interactive tastings. The fitting finale to the week long-long events is of course The RumFest. Tickets to select events are available now and more events will be announced soon with full information on the website – rumexperienceweek.com or from rumfest.co.uk.

RumFest Founder and Global Rum Ambassador Ian Burrell is the leading name in rum. Dedicating his life to promoting rum and rum culture around the world, over the years Burrell has been recognised with a number of industry awards as well as regularly appearing as a rum expert at events and on television shows like Sunday Brunch, the Alan Titchmarsh Show and more.

Speaking about the return of RumFest, Burrell says, “We’ve refined RumFest this year into something very special. We’ll be taking rum lovers on the UK’s biggest celebration of rum yet, showing them the fun side of the culture, while at the same time giving an insight into the spirit so they can take home what they’ve learnt, armed with a better understanding of the spirit. And with this we introduce the first ever Rum Experience Week which allows rum and spirit lovers to rejoice in the marvels of the category in a entire week-long celebration. We look forward to seeing you there.”

The RumFest takes place in London at the ILEC, 17th to 18th October 2015. Standard day tickets are now on sale at £49.95, which includes access to all areas of the the event and tastings from all exhibitors. VIP tickets are on sale from £75 and allow for early access of one hour ahead of standard ticket buyers along with a two course Caribbean lunch and RumFest goodie bag. Golden Tot Tokens are £5 each and allow for additional access to the more premium rums on offer. One token can be exchanged for rum retailing £80 – £100 and more expensive rums will be available for additional tokens. Tickets to the new private rum tastings will be announced soon. For full information on RumFest and to buy tickets head to rumfest.co.uk.