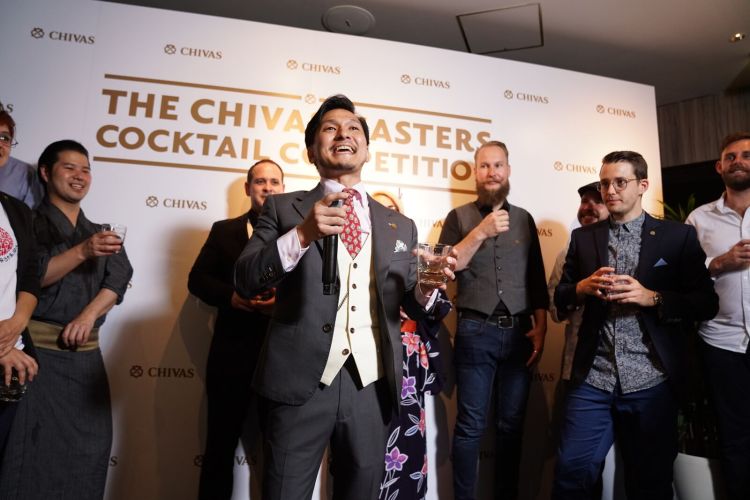 Chivas Regal, the world’s first luxury whisky, has crowned Atsushi Suzuki from the Sober
Company in Shanghai, China, the 2017 Chivas Masters Global Champion. Over a challenging five-day finale in Tokyo, Japan, Atsushi overcame strong competition from 14 of the world’s most skilled bartenders and led the winning Chivas Masters Collective team to victory, before being declared the overall champion.

The fourth Chivas Masters Global Final required the 15 national winners to showcase the
Chivas Regal values of brotherhood, collaboration and generosity. Atsushi impressed the expert panel of judges by expressing these core principles as he proved the outstanding contestant in what was a highly captivating and memorable final, culminating in the awards ceremony at the MIXX Bar & Lounge at the ANA InterContinental Tokyo.

A Japanese native himself, Atsushi fully embraced the traditions of Japanese bartending culture throughout a week of individual and team challenges, which included four individual drinks-making rounds. Atsushi’s winning team drinks ritual was The Double Talk, which was made using Chivas Regal 12, and presented with a focus on Japanese craftsmanship, kind service and attention to detail. Inspired by the way in which great drinks can bring people together and cross language barriers, he collaborated with his Mexican and Hong Kong team-mates, and was mentored by hospitality industry pioneer and team sensei Iain Griffiths, to devise a ritual which ensured the drink was designed to be shared, and allowed the drink to be adapted and personalised for different countries around the world.

As the newly crowned 2017 Chivas Masters Global Champion, Atsushi has won an all-access, all-expenses-paid trip to Tales of The Cocktail 2017 in New Orleans. The winning Chivas Masters Collective team led by Atsushi – comprising Mexico’s Haydée Barron Flores and Ryan Nightingale from Hong Kong – walked away with the pinnacle of the range, Chivas Regal The Icon, presented in a bespoke decanter with customised Japanese glassware.

Upon being crowned champion, Atsushi commented: “Wow. It is such an honour to receive this – and in my home town too. I feel like it’s a win for Japan as well as for China. And of course it’s not just for me, but for my awesome team of Haydée and Ryan, and my sensei, Iain. I’ve found friends for the rest of my life through the Chivas Masters – and I’ve learnt how to be a better bartender too.”

Max Warner, Global Brand Ambassador for Chivas Regal, commented from Tokyo: “The Chivas Masters Global Final has again shown the world the wonderful values and principles that great bartending can harness. Atsushi fully took the Chivas Regal spirit of generosity and collaboration with him into the final, which was the eventual point of difference in a very tough field – alongside, of course, some spectacular bartending skills.

“Beyond the serve itself, teamwork and collaboration are just as crucial to the craft of drinks-making, and we have witnessed that here today, and throughout the entire contest. That is why we are also delighted to honour the entire winning Chivas Masters Collective, who helped lead our champion to victory and demonstrated that success really does taste better shared.”

The 2017 Chivas Masters Global Final was host to a distinguished panel of internationally
acclaimed judges: Iain Griffiths, hospitality industry pioneer and co-founder of Mr Lyan Ltd;
Micah Melton, beverage director at the Alinea Group and renowned ‘ice chef’; Chris Lowder, ‘New York’s Rising Star Bartender’ in 2015; Dré Masso, ex-director of bars for the Potato Head Group in Bali, Jakarta, Singapore and Hong Kong; and Rogerio Igarashi Vaz, owner of Tokyo’s Tram & Trench. Each not only scored the finalists, but also shared their insights and expertise through a series of inspirational masterclasses over the course of the week.

The evening also saw the first ever Chivas Masters Global Champion, Masa Urushido,
honoured as a Grand Master, in his native Japan.

Garnished with Matcha Tea Salt – or customised to your country

Stirred and served over block ice in a rocks glass, with a side serve for sharing